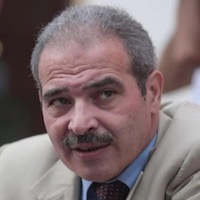 Rawhi Abeidoh (photo), whose career at Reuters stretched from oil stringer in Abu Dhabi in the 1980s to bureau chief in Dubai in the early 2000s, has died in Turkey after several years of poor health.

Rawhi was a talented classical musician, playing the oud, and in retirement in Dubai in 2003 he founded a successful musical instrument shop and teaching academy called The Music Chamber. In 2019 he suffered a heart attack and travelled to Turkey for surgery; late the following year his beloved wife Dalal died from a rapidly-spreading cancer; and in 2021 Rawhi moved permanently to a small resort town south of Istanbul to be close to his doctors.

I knew Rawhi best in 1992-93 when I was bureau chief in Cairo and suggested that Rawhi should take over our Arabic Service, Paul Eedle writes. It was a big challenge, probably an unfair one, to ask a Palestinian from Jerusalem to manage a tightly-knit team of Egyptian translators and journalists, but Rawhi worked tirelessly to develop the service. Dalal was a business correspondent for Arabic newspapers and their two children, Reem and Abood, were primary school age but she and Rawhi still found time to be generous hosts to colleagues and friends, Dalal cooking delicious food and Rawhi playing the oud.

Rawhi was proud of his roots in Jerusalem and Paul Holmes remembers him visiting often on holiday with Dalal, Reem and Abood during Paul’s time as bureau chief there in the late 1990s.

Reem wrote in her Facebook post announcing Rawhi’s death on 13 August: “Our dad had a fierce soul. He was a man of honor, pride, integrity. He always fought for the truth in his career and life. He refused millions of dollars in bribes and dodged death threats because of his commitment to truth as a journalist … He didn’t have a formal college education or even a red cent to his name when he began - but he made something of himself and left a legacy that will live on through us.”

Deepest condolences to Reem and Abood on loss of a terrific journalist and a wonderful man. ■