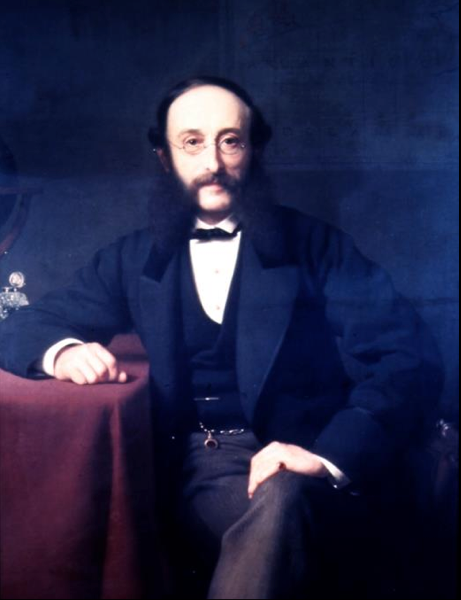 Goes to England as Julius Josaphat.

Baptised as a Christian at St George's Lutheran chapel in Alie Street, Whitechapel, London in the name of Paul Julius Reuter.

Geller agrees to assign all of his pigeons - more than 200 - to Reuter’s use.

Arrives in London from Aachen where he has been running a news and stock price information service using a combination of means - telegraph cables and carrier pigeons.

Opens an office in two rooms at 1 Royal Exchange Buildings close to the main telegraph offices in London's financial centre.

Naturalised as a British subject.

Reuter gets his first scoop: the King of Sardinia's speech foreshadowing war between France and Austria.

Reuter’s Telegram Company is registered as a public limited company.

Reuter provides coverage of the American Civil War, breaking the news in Europe of the Confederate south's surrender.

Reuter’s report of the assassination of US President Abraham Lincoln on 14 April reaches London first. After 12 days crossing the Atlantic a Reuter agent intercepts the mail boat off Ireland and telegraphs the news to London. The agency wins its first big scoop and European financial markets are thrown into turmoil.

Reuters moves to nearby premises at 5 Lothbury having outgrown the original office.

Reuters signs an agreement with the French Havas and German Wolff telegraph agencies giving each member of the triumvirate its own area of control in different parts of the world.

Reuters’ headquarters moves to 24 Old Jewry in the City.

Duke Ernst II of Saxe-Coburg-Gotha confers a German barony on Paul Julius Reuter. Henceforth he is known as Baron de Reuter. His coat of arms features the globe on a blue shield, broken by rays of lightning from its four corners. The motto is per mare per terras (by land and sea). Queen Victoria recognises the title in 1891.

Baron de Reuter retires as Managing Director at 61 “in consequence of failing health”. He is succeeded by his son, Herbert, born in London in 1852 and now just 26.

Correspondents are instructed to report “fires, explosions, floods, inundations, railway accidents, destructive storms, earthquakes, shipwrecks attended with loss of life, accidents to war vessels and to mail steamers, street riots of a grave character, disturbances arising from strikes, duels between, and suicides of persons of note, social or political, and murders of a sensational or atrocious character”.

During the Boer War, Reuters reports the relief by a British force of the besieged town of Mafeking. It is the agency's greatest scoop up to this point.

Three days after the sudden death of his wife, Baron Herbert de Reuter, 63, shoots himself, ending the Reuter family’s direct connection with the company. His only son, Hubert de Reuter, a schoolmaster serving as a private with the Black Watch regiment of the British Army, would be killed by machine-gun fire whilst carrying in wounded men on the Somme on 13 November 1916.

1918 Reuters is first with news of the Great War Armistice to the British Empire, and ahead of the British Government in several parts of the world. The news reaches Melbourne an hour before the official report.

Reuters develops the use of radio to transmit news internationally and starts a service of price quotations and exchange rates sent in Morse Code by long-wave radio to Europe.

1923 Reuters is first with the news of the opening of the tomb of Tutankhamen in the Valley of the Kings, Egypt.

Press Association takes a 53 per cent majority shareholding in Reuters.

Contract between Reuters and The Associated Press ends an old cartel and gives both agencies freedom to sell their news anywhere.

Reuters moves to 85 Fleet Street shortly before the outbreak of the Second World War.

One of the most notable Reuter beats secured by radio monitoring is the first news of the German invasion of the Soviet Union.

Reuters is restructured so that it is owned by the Press Association and the Newspaper Proprietors Association representing the British national and provincial press respectively. The Reuters Trust is created and its Principles are adopted to safeguard Reuters’ independence, integrity and freedom from bias.

Reuters shares a successful picture business with the Press Association to 1965.

Reuters is first with news of the assassination of Gandhi.

Television side of Reuters begins with the ccreation of Visnews, a global television news agency. The company is formed as British Commonwealth International Newsfilm Agency Limited (BCINA). Its later name, Visnews, is registered as the company's telegraphic address. Reuters holds shares in Visnews from 1960 until buying it completely in 1992.

BCINA adopts Visnews as the official name of the company. The News Service takes in its first news story by satellite.

Reuter Monitor screen: Initially used for the retrieval of financial data - the Money Rates Service - and later for dealing in foreign exchange and other items, this revolutionary computerised product is destined to transform Reuters. The Dealing system cuts average transaction times of 40 seconds to as little as two seconds. It features a green screen and QWERTY-style keyboard.

First use of video for textual news display with introduction of Videoscan in the United States.

Videomaster, a screen display of stock and commodity prices, is introduced.

Reuters starts its first video editing system. Journalists use Video Display Units instead of typewriters to write and transmit news.

Reuters ceases subscribing to Agence France-Presse and begins separate reporting out of France.

Reuters becomes a publicly-quoted company on the London Stock Exchange and NASDAQ in New York as Reuters Holdings PLC.

Reuters text and pictures operations are harmonised, creating a single desk of London's photographers and the Brussels-based picture-editing team. The pictures service operates with about 135 staff in 33 countries. It has exchange agreements with more than 20 specialist news photo agencies. Spending $34.5 million on research and development, it is poised to go digital.

Reuters is first with news of the Iraqi invasion of Kuwait.

Reuters processes 250 news pictures from around the world daily, transmits 100 of them to any individual client and sends a full-colour picture in less than 30 seconds to a certain client in Europe.

Reuters and Dow Jones announce agreement to combine their interactive business services for the corporate and professional markets in a joint venture, Factiva.

Launch of Breakingviews.com, which comments on the biggest financial stories as they break in the United States, Europe, Latin America, the Middle East and Asia.

Nokia Research Center and Reuters work together on a mobile journalism project that transforms the way journalists file news reports when on the move.

Thomson Reuters shares cease to be traded on the London Stock Exchange and NASDAQ in New York. The shares remain listed on the New York and Toronto stock exchanges.

Launch of Eikon, a destination for global information, technologies and market access, and Elektron, an open, interactive, high-speed trading and data infrastructure.

Launch of Reuters TV, the first personalised mobile TV news service for iOS, which integrates curated TV news, live footage and social media feeds, and which gives users control of how, when and where to watch the news.

Reuters moves its London hub to 5 Canada Square the Canary Wharf district after moving out of 30 Colonnade nearby. ■