Baron de Reuter in a caricature titled "Telegrams" published in Vanity Fair on 14 December 1872. It was the 55th in a series of 2,500 titled Men of the Day which featured individuals whose role in society was deemed notable. The portraits in this international gallery included royalty and pre-eminent statesmen, politicians, judges, lawyers, artists, sportsmen, and pioneers of science, commerce and industry. They appeared in the magazine between 1869 and 1914.​ 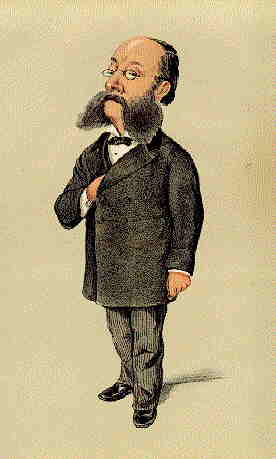 As foreign news is now managed it is not too much to say that he who has the command of telegrams has the command of public opinion on foreign affairs. It is from these pithy despatches that we get all our notions of what is going on abroad, and upon them that we hastily form and modify what we are pleased to call our opinions thereupon. By them the opinions and therefore the acts and fate of all the civilised nations are moulded day by day, and it is disquieting to think of the immense power for ill which could through them be wielded by any dishonest or interested man having the control of them, for it would practically be a power without appeal save to himself. One of the more remarkable incidents of modern international relations is the fact that all the telegrams of Europe are indeed practically in the control of one man and of the correspondents in his pay; and it is pleasing to know that he has never yet been suspected of a conscious purpose to use them for the interests of a particular individual or country.

Mr. Reuter was born a German some fifty-five years ago, and after passing his first youth in a Göttingen bank, became a bookseller in Berlin, where he met with no success. In 1849 however, being then of the age to form plans, he became an employé of the Prussian Government in the telegraph-office then for the first time open at Aix-la-Chapelle, and showed himself very apt at devising methods  for the acceleration of the transmission of news. In 1851, a cable having then been laid between France and England, he left Aix-la-Chapelle and came to London, where he established himself in the character of a private agent for early intelligence. The English newspapers at that time had each one its own special source of foreign news, and Mr. Reuter, intending as he did to become the one general source for all, was not at first favourably received. He was indeed looked upon with suspicion, and twice failed to obtain the support of the London Press. He worked hard at his project however, and during the Russian War his news obtained some attention. At length in 1858 he made a third effort, and during an entire month sent daily a series of general foreign telegrams to every London newspaper, leaving to each the option to purchase or to refuse them. Some purchased and some refused, but his scheme now began to make decided progress, and when in the following year he produced in London an hour after its delivery a report of the Emperor Napoleon’s threatening speech to the Austrian Ambassador which led to the Italian War, his reputation was at once established as by a coup de théâtre. During twelve years he has now had the monopoly of foreign news, and the organisation by which he has maintained that monopoly against all competition is spread over the whole world. There is no important town in any quarter of the globe where he has not one or more correspondents in direct relations with those bankers, merchants, and ministers from whom news is best to be obtained. During the German War his correspondents had access to the highest sources of information, and it happened more than once that his telegrams brought to Berlin the first news there received of the German successes. At present there is nothing to interfere with his absolute command of all foreign intelligence, and the English Press which he supplies is allowed only to retain the power of excluding but not that of altering any of his despatches.

When he arrived in England Mr. Reuter with the shrewdness of his race caused himself to be naturalised as an English subject, and in 1861 he was made a Baron by a German Prince in recognition of his public services. In London he is respected as becomes a man of his power and great wealth, possessing a fine house and wife and always ready to show a magnificent hospitality. Thus moved, Society has used him graciously, and he in return appears to feel a considerable affection for the country whose notions of foreign affairs he holds in his hand. ■