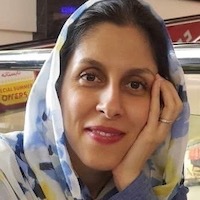 “Branch 15 of the Islamic Revolutionary Court summoned Nazanin Zaghari and her designated lawyer this morning and informed her of a new indictment,” state television cited an unnamed official as saying on its website.

Zaghari-Ratcliffe was arrested in April 2016 at a Tehran airport as she headed back to Britain with her daughter after a family visit.

She was sentenced to five years in jail after being convicted of plotting to overthrow Iran’s clerical establishment. Her family and the Foundation, a charity that operates independently of Thomson Reuters and Reuters, deny the charge.

Zaghari-Ratcliffe was temporarily released from jail in March amid concerns over the spread of the new coronavirus in Iran’s prisons but is barred from leaving the country. ■