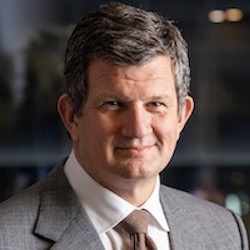 The changes take effect on 15 March.

Neil Masterson and Brian Peccarelli will continue in their roles as joint chief operating officers.

Thomson Reuters also announced higher-than-expected fourth quarter earnings, reporting a 60 per cent year-on-year rise in operating profit, helped by lower costs and investments following the sale of a controlling stake in the financial and risk business.

Thomson Reuters maintained its organic revenue growth target this year of four to 4.5 per cent and said its margins will be a little higher than it forecast in October and also above 2019 levels.

Operating profit in the quarter rose 60 per cent to $216 million. On an adjusted basis, earnings in the fourth quarter rose to $185 million, or 37 cents per share, from $102 million, or 19 cents a share a year ago. Analysts, on average, expected 33 cents.

Reuters News' organic revenue was $164 million, up five per cent.

On a call with analysts following the financial report, Smith reaffirmed the company’s commitment to the news business which now contributes about 10 per cent of total annual revenue.

“There’s a lot for us in addition to the tradition and the emotional attachment to the news business that many of us in leadership share,” Smith, a former journalist, said.

“What we’ve tried to explore ... is more corporate verticals. I see no reason why we can’t have newsfeeds and integrate Reuters News into our professional products as successfully as we have in our financial products.”

Smith oversaw a period of major change at the company in which it cut costs and shed some businesses as it recovered from the fallout of the financial crisis in 2008.

Reuters said his defining accomplishment was the sale he engineered of a 55 per cent stake in the company’s financial division in 2018 to private equity investors led by Blackstone, which valued the business at $20 billion. Blackstone subsequently struck a deal to sell the business, now called Refinitiv, to the London Stock Exchange.

Shares of Thomson Reuters have more than doubled since the Refinitiv deal, and have tripled since Smith took over as CEO from Tom Glocer in 2012.

“If you ask me what I am most proud of is the people in Thomson Reuters, and what we do every day and the difference that we make in the world,” Smith said in an interview with Reuters.

The company, controlled by Canada’s Thomson family, said the board of directors approved an eight cent per share increase in the annual dividend, to $1.52 per share.

Hasker, most recently a top executive at Hollywood talent agency CAA and a senior adviser to TPG Capital, told employees in a staff conference call: “We have to see ourselves, before too long, to be true global leaders in the advanced analytics space and in the software and AI space.” ■