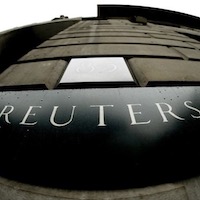 The British government secretly funded Reuters in the 1960s and 1970s at the behest of an anti-Soviet propaganda unit linked to British intelligence and concealed the funding by using the BBC to make the payments, declassified government documents show.

The money was used to expand Reuters coverage of the Middle East and Latin America and hidden by increased news subscription payments to Reuters from the BBC.

“We are now in a position to conclude an agreement providing discreet Government support for Reuter services in the Middle East and Latin America,” according to a redacted 1969 British government document marked “Secret” and entitled “Funding of Reuters by HMG”.

“HMG’s interests should be well served by the new arrangement,” said the document, which was declassified last year. HMG stands for Her Majesty’s Government.

The extent of influence - if any - that the government was able to exert over Reuters news in return for the money is unclear from the documents, which detail a 1969 secret British government financing deal for Reuters.

However, the documents illustrate the level of involvement the government once had in Reuters’ affairs and the explicit agreement to conceal the financing.

Earlier on Monday, the BBC published a story about the government funding.

“Many news organisations received some form of state subsidy after World War Two,” David Crundwell, a spokesman for Reuters, said.

“But the arrangement in 1969 was not in keeping with our Trust Principles and we would not do this today,” said Crundwell, referring to the Reuters Trust Principles, designed to preserve the news agency’s integrity, independence and freedom from bias.

The news gathering activities of Reuters are overseen by the Founders Share Company, which was created in 1984 to uphold the Trust Principles. The principles stipulate that no single interest, group or faction should come to dominate Reuters.

While Reuters sells news to a broad array of customers including governments, no government exercises control over how or what Reuters produces, Crundwell said.

A BBC spokeswoman said: “The BBC charter guarantees editorial independence irrespective of whether funding comes from the UK government, the licence fee or commercial sources.”

The British government’s funding of Reuters in the 1960s and 1970s was disclosed in a 1992 authorised history of the news agency “The Power of News: The History of Reuters”.

In 1969, Reuters needed money to further expand in the Middle East and Western powers such as Britain wanted to bolster their influence against the Soviet Union by expanding news services across the world, the documents showed.

“The new relationship established with Reuters in the Middle East and Latin America can lead to valuable goodwill and cooperation with the Agency on a global scale,” John Peck, former head of the IRD, said in the documents.