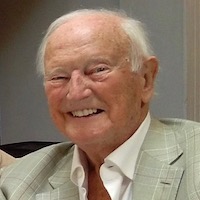 Brian Quinn (photo), who died on 23 September at the age of 83, came into the orbit of Reuters in 1980 as the managing director of Visnews, Peter Marshall writes.

At that time, Michael Nelson was chairman of a committee of directors of Visnews seeking a new managing director to succeed Sir Charles Curran (a former director general of the BBC). From a shortlist provided by head-hunters, they selected Brian Quinn who had a good business background - a significant change from his two predecessors at Visnews who had both been from the BBC.

Quinn brought his past experience in business, banking and government to Visnews and presided over the growth and development of the international TV news agency during its transition from a film-based operation to the new technologies of electronics and the use of satellites. The company also diversified its activities into TV programme production, an operating subsidiary in the USA and a pioneering satellite-leasing company called Brightstar.

In 1985, Reuters took a majority holding of more than 50 per cent of Visnews and Quinn began to look for opportunities elsewhere. He moved on in 1986 when he was succeeded by a Reuters man, Julian Kerr. Reuters increased its holding to full ownership in 1992. A few months later, the name was changed to Reuters Television.

Quinn was educated in Ireland and gained a law degree at University College, Dublin. After leaving Visnews he was involved in a range of business activities and headed a company providing computer maintenance services. He maintained his links with the media world through his work with the International Institute of Communications (IIC) where he served as director general for three years and was chairman of the Trustees. He also retained his connections with Ireland and after partially retiring to Nassau he was appointed as the Irish honorary consul to the Bahamas from 2011 to 2014 and worked on creating business links between the two countries. ■