Trump to Reuters: 'Are you talking to me?' 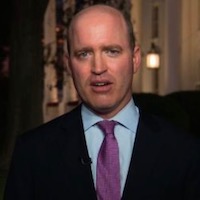 President Trump lashed out at Reuters reporter Jeff Mason (photo) in an angry exchange at the White House.

Mason asked Trump what he wanted the president of Ukraine to do about Democrat rival Joe Biden and his son. Instead, Trump criticised European countries for not providing aid to Ukraine, attacked the US impeachment investigation as a "hoax" and berated Mason for being “rude”.