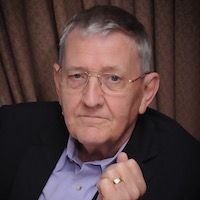 John Hopper (photo), who died from cancer in London on 9 November aged 84, began a 40-year career with Reuters as a telegraphist in the days before video-editing and computers.

Telegraphists were staff who typed edited news copy for transmission to subscribers and “Hoppy”, as he became known, was one of the best, often saving sub-editors who missed a typo in the rush to get stories out.

When he joined the agency in 1956 Reuters had around 400 staff in London, he recalled as he approached retirement 22 years ago, and only one property, its headquarters at 85 Fleet Street.

“My first job was on the fourth floor, the General News or World Desk area. It was very noisy - no PCs, just typewriters and teleprinters and telex machines, clacking away 24 hours a day,” he said.

His daughter Stephanie, who worked for Reuters UKI marketing, wrote on Facebook: “He was passionate about keeping in touch with the news right up to the end - even asking me this week (amid a very serious illness) - so what is happening with Brexit then? (he was seriously dismayed about Brexit!).”

The family requests no flowers, instead donations to fund the research of T-Cell Lymphomas like Sezary Syndrome via https://www.justgiving.com/fundraising/johnbhopper. ■