Refinitiv is born and plans to invest - CEO 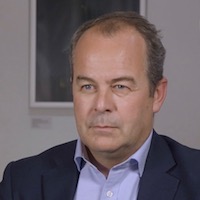 The terminals and data business founded by Reuters and run by Thomson Reuters for the past ten years formally separated on Monday as a privately-owned stand-alone operation called Refinitiv.

It is controlled by Blackstone, the world’s largest private equity firm, which acquired 55 per cent of Thomson Reuters’ financial and risk division in one of the biggest leveraged buy-outs since the 2008 financial crisis. Blackstone has two junior partners in the investment - Singapore’s sovereign wealth fund GIC and Canada’s biggest pension fund CPPIB.

Thomson Reuters, majority owned by the Thomson family of Canada, retains a 45 per cent stake in Refinitiv in a strategic partnership with Blackstone.

Refinitiv’s owner is King (Cayman) Holdings Ltd, according to a filing with the US Securities and Exchange Commission.

Bloomberg terminals are the market leader in providing traders, bankers and investors with news, data and analytics.

It also gives Thomson Reuters an ally as it seeks to reinvigorate a business facing challenges from a shrinking and budget-conscious customer base.

Thomson Reuters, formed in 2008 when the Thomsons paid $17 billion for the Reuters organisation founded in 1851 by Paul Julius Reuter, retains ownership of Reuters News, which will supply editorial content to Refinitiv under a 30-year contract worth at least $325 million a year.

Thomson Reuters retains full ownership of its Legal and Tax & Accounting businesses. Following the deal, Thomson Reuters had said it expects its legal business to account for 43 per cent of its revenue.

Refinitiv is headed by David Craig (photo), who had run F&R since 2012. He is founding president and chief executive of the new partnership and a non-voting member of a ten-member board.

In a message to the new company's staff, Craig said: “The moment is finally here - the papers are signed, the monies are transferred and the transaction between Thomson Reuters and Blackstone is complete.

“This is a milestone for us all and it would not have been possible without the sheer grit and determination of you all.”

He added: “I’m very aware that with all the excitement around standing up our new company, there is a feeling of uncertainty about potential changes…

“So we did it. We are now a standalone company. A $6 billion, global start up with a vision for how we will make a difference for our customers and the market.”

Craig told the Financial Times: “There’s some areas where I think, frankly, we’ve not invested as much as the market growth could give us.”

The FT said he grew frustrated at sharing a budget with the news and publishing arms of Thomson Reuters.

“All of this comes under our control,” he said. “We can invest more effectively than we did before. We're going to put more investment in the business than we have in five years.”

Craig said investment was needed to fend off competition from rivals, including Bloomberg, which compete in the $50 billion global data, transactions and technology market.

The FT said Refinitiv plans to invest in trends such as machine learning, cloud computing and automation, to push into emerging markets or modernise existing businesses.

However, the company must also contend with $13.5 billion of junk-rated debt. The FT said that with turnover of $6 billion in 2017 and 11,000 employees, Refinitiv was Thomson Reuters’ largest division, but its earnings before interest, tax, depreciation and amortisation margins of 29 per cent were its lowest. Other sources say Refinitiv has 22,000 employees.

In spite of his spending plans, cost cuts will be needed, the FT said. The debt prospectus described Refinitiv as “right sizing” the organisation - cutting positions and increasing the number of offshored jobs to Asia. It aims to save $300 million a year by the end of 2021 from headcount and overall save $650 million a year. In that period it also expects to take one-time costs totalling $500 million.

“I don’t see it as offshoring; it’s about getting talent,” said Craig. The company will also reduce the number of data centres and keep tighter control over procurement.

Its debt size has led to speculation Refinitiv could spin off some of its prized trading assets such as FXall, the foreign exchange platform, or Tradeweb, which transacts more than $500 billion a day in bond, derivative and exchange traded funds deals.

Of Tradeweb, estimated to be worth $4 billion, Craig said: “It’s very strategic to us and doing really well, and gives us a lot more opportunity in fixed income. We definitely have no intention to sell it.”

Equally, “FX is our crown jewel asset class... it’s an amazing business. Why would you want to lose that when it’s core to your platform?”