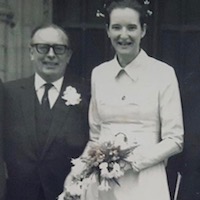 A former Reuters journalist whose disappearance in Africa more than half a century ago was said to have set back the promotion of women in the agency for years has died at the age of 85.

Elizabeth Bower joined as a 23-year-old editorial trainee in 1956 when most foreign correspondents were male. The well-connected daughter of a member of parliament, she had been accepted on the recommendation of Sir John Burgess, a provincial newspaper owner who was close to Reuters and became its chairman in 1959.

After two years of desk work in London she landed the job of correspondent in West Africa, based in newly-independent Ghana’s capital Accra.

Kenneth Valpy, Reuters registrar, remarked: “Men normally receive a tropical kit allowance of £60, but I do not imagine that women need equivalent outlay… but she will need to buy some things.”

Tony Cole, editor-in-chief, and Sir Christopher Chancellor, chief executive, felt she was the right candidate for the job. Cecil King, a director of Reuters and owner of the Mirror group (which included the Accra Daily Graphic), thought they were mad to send a young woman to such a location, and told them so.

Six feet tall and with striking looks, Bower cut a conspicuous figure in Accra where she arrived in October 1958.

The alien environment and scorching temperatures, however, meant that for the first weeks she was sleepless, ill and increasingly beleaguered. One evening she complained of dizziness and retired to bed before dinner. The next day she walked out of her hotel and vanished.

Several people came forward to say that, on the previous day, they had seen her wandering around in a rather strange manner. In Britain, the story of her disappearance became a major news item in its own right and for Reuters a publicity disaster.

It became Ghana’s biggest-ever hunt for a missing person.

Reuters sent Donald Wright, a senior journalist, to Accra to look for Bower. Her aunt Mabel Strickland, owner of The Times of Malta, sent an instruction to Wright that he was to look in all the ladies lavatories in all the hotels. She was sure she had locked herself in. Wright did as he was told but to no avail.

Three days later, Bower was found. A taxi driver spotted her lying unconscious by the roadside in a remote bush area about 46 miles north of Accra. Apart from having gone without food for more than 24 hours, being covered in ant and mosquito bites and suffering from total memory loss, she was unharmed. She appeared to have suffered a breakdown. Within a short time she was on a plane back to England.

Cecil King said “I told you so”. Irritated by the fiasco, amongst other things, he resigned from the Reuters board in January 1959.

The following year Bower resigned from Reuters and returned to The Times of Malta.

Reuters veterans suggested that the incident put female advancement in the agency back by 20 years.

After leaving Reuters, Bower became an African affairs specialist for the British Foreign Office and, in 1964, a producer for BBC External Affairs. Later she married Erik de Mauny, the BBC’s Paris correspondent, and after his death married Squadron Leader Michael Wainwright, a former Battle of Britain Spitfire pilot.

PHOTO: Elizabeth Bower on the day of her marriage to Erik de Mauny in 1970. ■