News - the core element that gives Reuters an edge 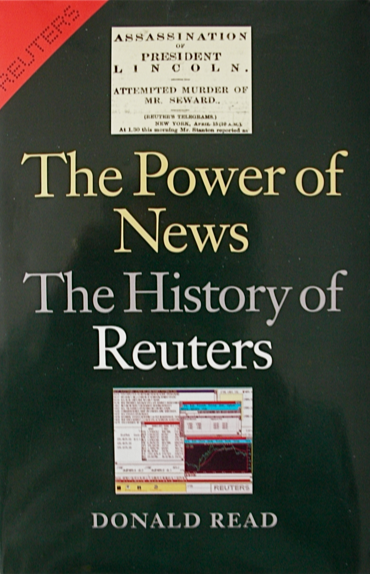 Reuters commissioned this history and both funded and facilitated years of research by Donald Read, Emeritus Professor of Modern English History at the University of Kent. The book, extensively revised and substantially rewritten for the Second Edition, is the most thorough account of the history of Reuters and the people who developed and shaped it over nearly a century and a half.

The book ends with the flotation in London and New York in 1984, the news chapters in 1989. It received mixed reviews.

Jonathan Fenby (Reuters 1963-1977), in The British Journalism Review, wrote: “Professor Read’s book is admirable on the history of Reuters, poking into forgotten corners most effectively while keeping the narrative coursing on through the Reuter family and their imperial successor, Roderick Jones, to Christopher Chancellor who had to face the prospect of post-war decline as Reuters grappled with insufficient budgets and aggressive competition from AP and UPI.”

One central advantage Reuters always had over potential competitors who might come from a communications or technological background was that it was a news agency, Fenby wrote.

“This is not to define news as being simply what you read in newspapers or hear on the BBC. News, for Reuters, had to have a much wider connotation - pork belly futures as well as the moon landing. What made, and makes, the difference is that, however complex its communications and however great its reliance on computers, Reuters is based on the notion of handling news, rather than simple data. (I must declare an interest: although all reference was cut from the book, I was the first editor of the Reuter World Service of general news from 1974-77 and so may over-rate the importance of news in the scheme of things - including news which fell outside my remit.) This core element in Reuters gives it an edge which pure communications or technological companies miss. It also opens Reuters to criticism and debate which they avoid, for instance over how its services are affected by the face that it is a market-driven company with its prime markets in Europe, the US and Japan and much less time for less remunerative regions.”

In seeking to survive through self-generated financial services, Reuters always presented itself as a news agency and was most hurt when it was suggested that its role in some of its services really amounted to little more than an electronic post office.

“This meant that the preservation of the news base in strength was essential. The men running Reuters from the 1960s saw this clearly - whatever their periodic annoyance at the way in which the general news journalists laid claim to the agency’s holy grail and expressed deep suspicions of the firm’s increasingly managerial culture. Even if the Reuter managers had not recognised this, they had no choice. The news dimension gave Reuters its specialness, its unique selling point. It means that, despite fears expressed at the time of the flotation, the agency today maintains a loss-making branch in a manner that would be foreign to most publicly quoted commercial companies. If the media would not be what it is without Reuters, Reuters would not be what it is without its news dimension.”

Alexander Chancellor (Reuters 1964-1974), in The Spectator, wrote: “Having been myself… a Reuter correspondent in Rome, it is also my duty to be objective and dispassionate. This duty is especially weighty with regard to this book, for there are two reasons why I might be prejudiced against it. One is that the author is harsh in his assessment of my father, Christopher Chancellor, who was General Manager of Reuters from 1944 to 1959; another is that he strongly defends the 1984 flotation of Reuters as a public company, against which Geoffrey Robertson QC and I conducted a vigorous campaign in the pages of this magazine.

“Professor Read’s thesis is simple. It is that Reuters, despite its claim to objectivity and impartiality, was for more than 100 years ‘a national and imperial institution, the news agency of the British Empire,’ constantly sacrificing its independence to British national interests. In his view true independence was only achieved in the past 30 years, during which Reuters ‘transformed itself from a national into an international institution’. This transformation was achieved through the company’s breathtaking exploitation of modern computer technology which enabled it to launch immensely profitable new services of financial and economic information available to customers at the touch of a button their desks. Previously, Reuter had had to finance its often loss-making general news service through diversification of one kind or another, or - especially in wartime - by calling on the British government for money. Professor Read’s main charge against my father is that, whereas he strongly condemned his predecessor, Sir Roderick Jones, for dealing so closely with the government, he himself perpetuated a form of concealed government subsidy by which the Foreign Office paid over the odds for receive Reuter services.

“It is unquestionably true that Reuters, especially during the first world war, had been at times compromised by its relationship with the British government and that its reporters would sometimes give vent to their prejudices. But the impression conveyed even by Professor Read’s somewhat naïve and shallow history is that Reuters never sought for itself a political role and usually tried as best it could to remain impartial within the political and commercial constraints of any given time. This is because a reputation for impartiality has been seen by Reuters throughout its history as essential to commercial success.

“That was why, at the start of the second world war, Reuters restructured itself as a Trust controlled by its principal subscribers, the British national and provincial newspapers, who were pledged the guarantee its impartiality and independence.”

Michael Fathers (Reuters 1970-1986), in The Independent, wrote: “If anyone picks up this history hoping to find a heroic or at least entertaining adventure about the great events of the last century; the role that a great institution played in them; the people, the reporters, how they survived, their setbacks, their achievements (with luck, written in simple, vivid English) they will be disappointed. There is no seething humanity, blood on the streets, biting of nails or waiting for trains. There is, however, just a hint of the journalistic madhouse in this grey and heavy book, though Professor Read is too prissy and censorious to go beyond describing one man’s private life as untidy, and the best story in the Reuters archives as a ludicrous mistake. The story goes that the sub-editor on duty in London, when Archduke Ferdinand was shot dead at Sarajevo in 1914, thought the brief urgent message that came via Paris was a racing result: Sarajevo (1), Ferdinand (2), Assassiné (3).”

He added: “It is, after all, an official history, which perhaps unwittingly reflects the new Reuters - richly bound, safe, competent and exceedingly dull.” ■