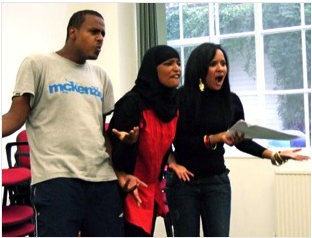 “Mix it Up” is the guiding philosophy of RefugeeYouth, a voluntary group that organises creative arts events for young people from London’s refugee communities.

The Reuter Society made a grant of £500 to the charity in 2009. The money went towards holding a festival for about 50 young people from many parts of the world at a farm in Kent, where they worked on a theatre project. They now hope to tour the country with the play they have produced, called “Becoming a Londoner”.

Thanking the Reuter Society, Lucy Pearson, RefugeeYouth’s Development Officer, said: “Our Mix it Up youth-led arts events bring together young people from across London for workshops, performances, food and dancing, to share ideas and cultures, learn new skills and celebrate together.”

The Reuter Society gives occasional modest grants from surplus funds to good causes backed by its members. The initiative for supporting RefugeeYouth came from Bernard Melunsky, whose late wife Barbara founded the charity, and John Rogers, a fellow supporter. ■