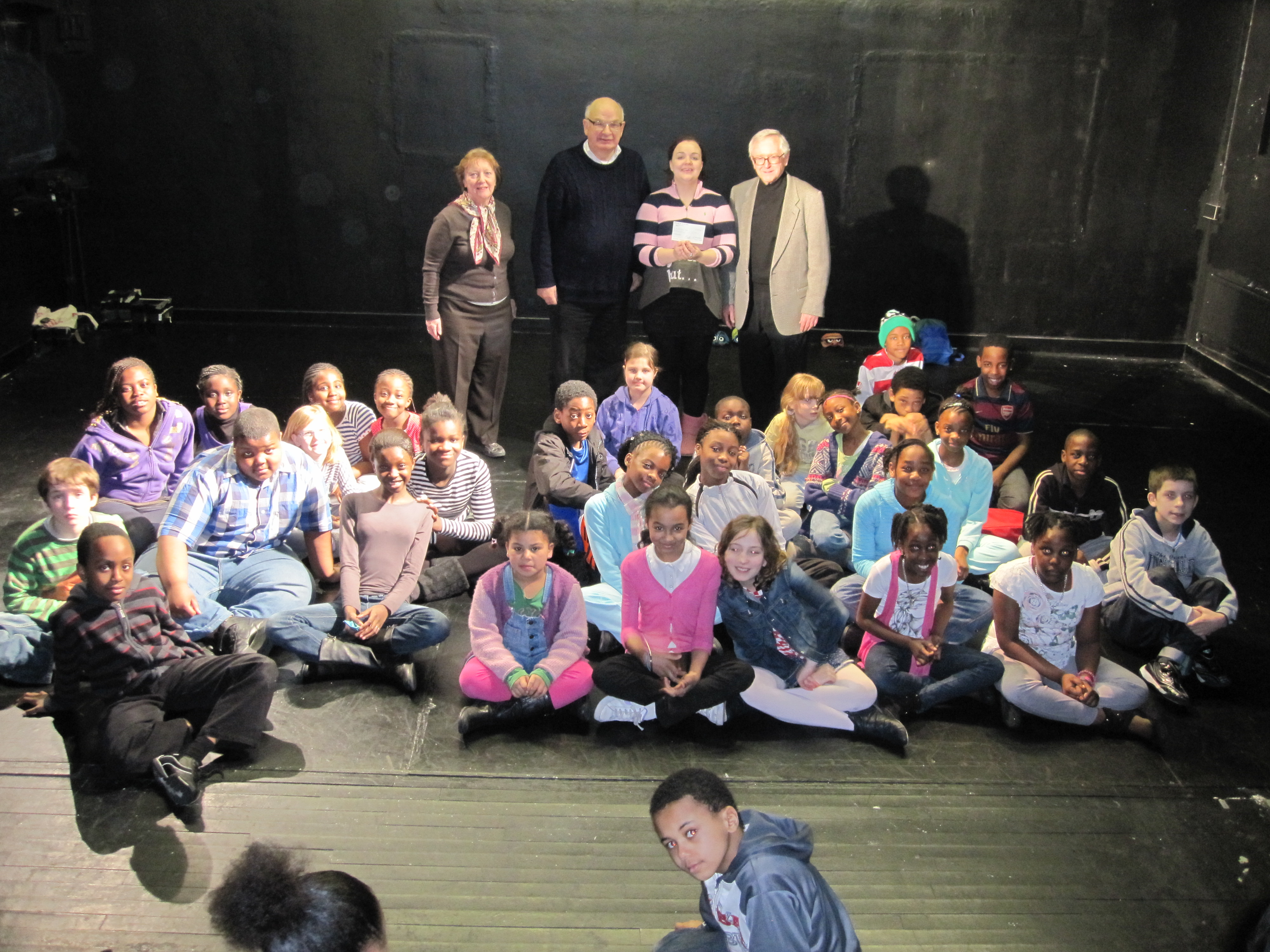 An informal theatre workshop and a professional performance for young school children were held at the weekend at the Blue Elephant Theatre in Camberwell, London, financed by a charitable grant from The Reuter Society.

The event, part of the theatre’s ongoing educational programme with local schools, was attended by about 40 girls and boys aged seven to eleven.

Stephen Somerville, the Society’s chairman, presented a cheque (£500) to Jo Sadler-Lovett, education officer, surrounded by applauding children sitting on the stage. They cheered enthusiastically when Somerville told them the money was donated “to feed the elephant”. He said he hoped that someday he might see at least a few of the children perform on a professional stage. He was joined for this occasion by Society members Rachel Whittaker, a magistrate in Camberwell, and Manfred Pagel, who had nominated the theatre for a grant.

The 50-minute humorous tale of adventure called “OOK! And the terrible thing that happened” featured masks, puppets and monsters. It was staged on Sunday by the Oxford-based Teatro-Saurus company, which specialises in performing plays and conducting workshops for children.

Stuart Cox, the Blue Elephant Theatre‘s education coordinator, described the event as “a fantastic opportunity for members of our Youth Theatre as they got to work with the same actors they saw performing the show the next day”.

Last October the theatre achieved wide-spread public recognition when it staged the world premiere of a play, The Cave, written in the 1950s by Mervyn Peake, author of the prize-winning novel Gormenghast. At the end of April the theatre will mark the centenary of Peake’s birth with a celebration of his plays and poetry.

The Blue Elephant Theatre in Camberwell, south London, offers low-budget entertainment and educational projects to one of the most deprived communities in the UK. It encourages new writing and emerging actors, while working closely with local schools in the field of the arts for young people.

At the suggestion of member Manfred Pagel, the Reuter Society is making a grant of £500 to support its work.

The Society gives occasional modest grants from surplus funds to a good cause backed by a member. The causes must conform to Reuters-style rules: nothing political, militant or extremist. The member must act as Champion, reporting back on the use of the grant.

Presenting his bid for funding, Manfred said the Blue Elephant was making a valuable contribution both to fringe theatre and the local community. Founded in 1999 as a charity, it provides a stage for visiting troupes of actors. It organises youth arts programmes, dance evenings and children’s theatre. It is run by a young and committed team comprising only two full-time employees, assisted by a changing contingent of young volunteers.

“As a valuable performing arts resource, the theatre is funded mainly by the Borough of Southwark, while some other previous sponsors have unfortunately faded away in the aftermath of the international credit crunch. The actress Joanna Lumley recently agreed to become the theatre’s first patron, thus enhancing its public profile,” Manfred said.

The theatre already has a reputation for putting on innovative productions. “A few weeks ago the Blue Elephant Theatre achieved wider public recognition when it staged the world premiere of a play, The Cave, written in the 1950s by Mervyn Peake, author of the prize-winning novel Gormenghast. The text had been discovered among his papers after his death in 1968,” Manfred reported.

Reuters even wrote a story about it. ■