Nazanin honoured for 'courage under fire' 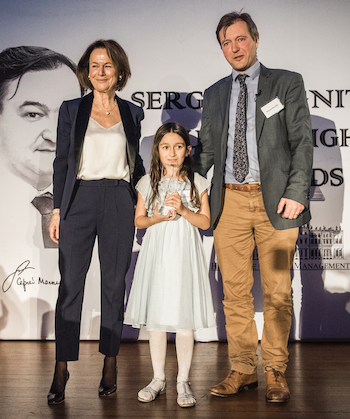 Nazanin Zaghari-Ratcliffe has received an award for courage under fire for the bravery she has shown since being detained by Iran’s Revolutionary Guards five-and-a-half years ago.

She was a colleague at the Thomson Reuters Foundation for five years before being taken, writes Monique Villa, formerly chief executive of the Foundation.

I was honoured that Bill Browder, the banker who became a thorn in Russian President Vladimir Putin’s side, asked me to hand over the Magnitsky Award for Courage Under Fire to Nazanin’s daughter Gabriella, seven, during a ceremony in London last week. Gabriella read a message from her mother.

The photo shows Gabriella with her father, Nazanin’s husband Richard, and me.

Watch the video of the ceremony here: https://www.youtube.com/watch?v=lvq4JIYPlpA ■