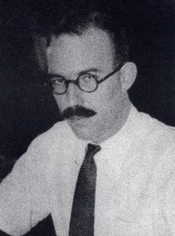 Details of the death of Kenneth Selby-Walker were never confirmed. On the basis of reports from various sources, he was presumed to have drowned with three other journalists when their boat was torpedoed off Sumatra in March 1942 while fleeing the advancing Japanese forces. A graphic, if laconic, account of his final days in Batavia, now Jakarta, on the island of Java comes from a series of service messages Selby-Walker sent by radio telephone.

He had joined Reuters from the Liverpool Post in 1934 and within four years was sent to Shanghai as Chief of the News Department under Christopher Chancellor, then General Manager, Far East. When Chancellor returned to London in 1939, Selby-Walker succeeded him. Two years later he moved Reuters Far East HQ from Shanghai to Singapore.

In January, 1942, a month before Japan took Singapore, Selby-Walker arrived in Batavia. Over the next few weeks other news correspondents departed rather than risk capture when the Japanese invaded. On 26 January he telegraphed Reuters saying: “Am staying on as there are communications and prefer to take my chances.” On 5th March he reported: “Another batch of correspondents have left. There are now only Daily Express (John Findon), Exchange Telegraph (Stephen Wykes) and BBC (Eric Davies) men and myself. I propose staying on unless you instruct otherwise.”​

I'm afraid it's too late. I have only myself to blame. Good luck. Hope to see you all sooner than you expect

Reuters replied: “Your attitude much appreciated. Easier for you than us to judge how situation developing. Use your discretion in staying until the last moment compatible with safe departure but remember we do not want you to be caught.” From Selby-Walker on 6th March: “Your reply received thanks but I am afraid it’s too late. I have only myself to blame. Good luck. Hope to see you all sooner than you expect.”

Nothing more was heard.

After the war it was reported that Selby-Walker and three other journalists boarded a Dutch vessel at Surabaya, Java, in March 1942 which was sunk by the Japanese the following day. They were presumed drowned. ■