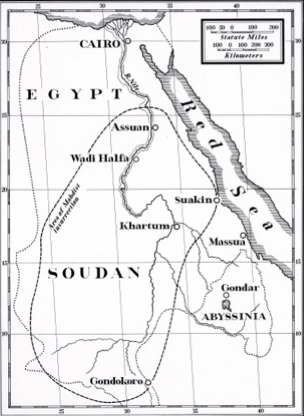 Frank Roberts was the first Reuters correspondent known to have died while covering a military campaign. He had been assigned as Special Correspondent with the British expeditionary force to Sudan under Lieutenant-General Sir Gerald Graham, a seasoned campaigner in Britain’s colonial wars. Graham had assembled a large garrison at Suakim, on Sudan’s Red Sea coast, south of what is now Port Sudan. The garrison comprised 13,000 soldiers and 11,000 labourers.

Graham’s orders were to crush forces loyal to Muhammad Ahmad ibn Abdallah, known as the Mahdi, a powerful and charismatic Islamic leader who was undermining British interests in Egypt and Sudan, an important part of the then British Empire. Graham arrived at Suakim in February, 1885. However, Khartoum, the capital of Sudan, had already fallen to the Mahdi in January after a ten-month siege, and General Charles George Gordon, a British national hero, had been killed.

Life was seldom easy for the new breed of war correspondents in the 1880s. Most generals did not care for them, and the troops saw them as self-styled experts with little real understanding. Their actual status was ambiguous. War correspondents usually had to make their own arrangements for food and horses. They had to obtain a permit from military headquarters and sign a War Office declaration. Yet they shared many of the risks of death from enemy action or, more likely, from disease.​ 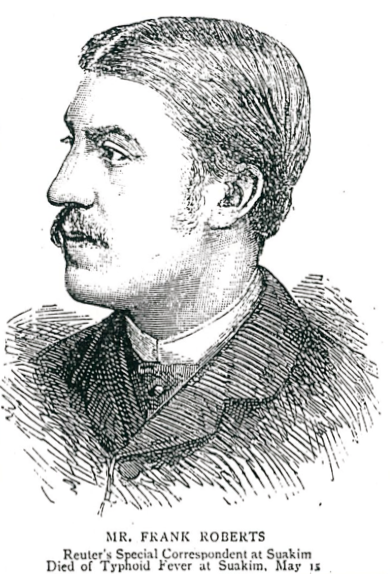 Frank Roberts died of typhoid fever on 15 May 1885, and was buried at Suakim next day. He was 25. Little is known about Roberts. His birth certificate and an entry in the 1861 census show that he came from an upper middle class family, the fifth child of a lawyer living in the fashionable London district of Bloomsbury.

Life was seldom easy for the new breed of war correspondents in the 1880s. Most generals did not care for them, and the troops saw them as self-styled experts with little real understanding. Their actual status was ambiguous

He was one of a number of correspondents used by Reuters to cover the Sudan campaign which, largely due to General Gordon’s involvement, had captured the imagination of the British public. General Lord Wolseley, who was in overall command of British forces in the Sudan - and who happened to be at Suakim when Roberts died - was known sometimes to feed false information to correspondents in order to mislead the enemy. He wrote about this time: “It is very necessary to manipulate correspondents and to be at all times on the best of terms with them...” In June 1888 Wolseley was chief speaker at the unveiling of a memorial plaque in St Paul’s Cathedral, London, to “the gallant men who in discharge of their duty as Special Correspondents fell in the campaigns in the Soudan 1883, 1884 and 1885”. Frank Roberts is the seventh and last name on the plaque. 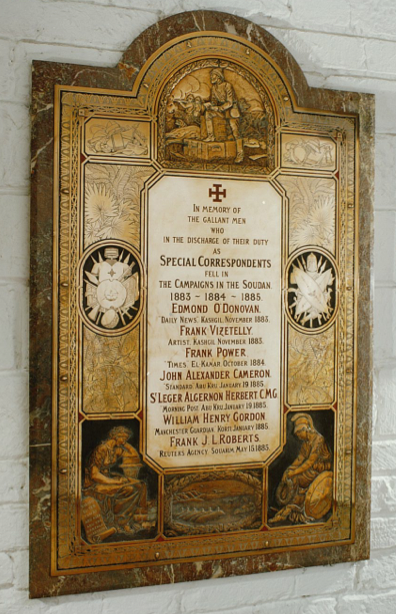 Above, an etching of Frank Roberts and left, the memorial plaque in St Paul’s Cathedral, London. His name is the last on the plaque. ■