After a 30-year wait, Gary Hershorn lives his dream 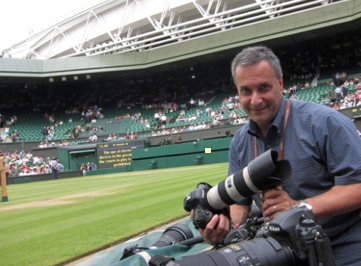 "After 30 years of being a photographer, 25 of those spent with Reuters covering every conceivable sports championship around the world, there were still two things I always wanted to photograph, but for one reason or another never had the opportunity to do so. One was shooting a match on center court and the other, covering a British Open golf championship at St Andrews," the Washington-based news pictures editor writes.

It was not his first Wimbledon fortnight. He had been there a number of times editing other Reuters photographers’ pictures. “There is no tennis tournament that produces the beautiful images that Wimbledon does. From the simple white clothes that the competitors must wear, to the light that seems to illuminate the court in a magical way, to the darkish backgrounds of spectators the perfect distance away from the player and to the history that has played out on the grass year after year, one can only describe the chance to be here as special.

"Special in the same way it is to have a chance to photograph the Masters golf tournament at the Augusta National Golf Club. Wimbledon and the Masters are ageless events played out in a similar way with no commercialism and lots of green as backgrounds. They are both considered ultimate events to cover as a photographer. The Masters I have been fortunate enough to attend 20 times.

"Growing up a huge sports fan and then becoming a sports photographer, Wimbledon was a place I wanted to see.”

Arriving at the All England Lawn and Tennis Club on Wednesday, Hershorn's colleagues and Bob Martin, tournament photo manager, decided he should leave the confines of the editing room and photograph the first match of the day between defending champion Roger Federer and challenger Tomas Berdych.

Hershorn swapped roles with photographer Phil Noble who took over the editing, borrowed Noble’s cameras and made his way to the court. "Walking out a tunnel and arriving on center court for the first time was definitely a wow moment. Standing there you instantly take in the sights that you have seen in pictures but never with your own eyes. First you notice how intimate the stadium is… Then you notice the grass, the new roof tucked away at the ends of the court, the Royal Box, the families box, the pre-match scurrying around of people measuring the net, stocking up the refrigerator with water for the players, positioning the players chairs just right, and so on…

“It didn’t take long to realize this was not going to be a normal Roger Federer three set match. Berdych came out strong and in the fourth set it was apparent Roger was not going to win today. That is when it hits you that there is a news story happening here, a six-time champion who has been in the past seven finals bowing out in the quarterfinal round. As the fourth set progressed I could feel my heart beating a little faster with each game Berdych won. Match point arrived, Berdych won and with heart racing, your mind remembers to photograph everything you see, the winners celebration, the losers walk to the net, the handshake, the after match waves of the winner and the players departing the court together.

"All in all it was far more than I expected. I started off thinking I would be photographing just another tennis match but left wondering if I had photographed a bit of history, a great champion exiting a championship earlier than expected and wondering if he would be able to win this great event again. While Federer will make a return to center court I knew when I walked out it was doubtful I would ever be back to shoot a match in this stadium. Walking down the tunnel I looked back one last time, thinking how my dream to photograph a match on center court completely lived up to the billing I gave it in my own head.

"The British Open will be played in two weeks at St Andrews and finally, I will get to live out that other dream of mine and help cover that event.

"Two dreams completed in less than one month is more than anyone can ask for."