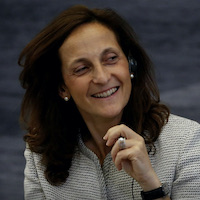 Reuters is set to name one of its top editors, Alessandra Galloni (photo), as its next editor-in-chief. She will be the first woman to lead the agency in its 170-year history.

A native of Rome, Galloni, 47, will replace Stephen Adler, who is retiring this month after leading the newsroom for the past decade, Reuters reported.

A speaker of four languages, and with broad experience covering business and political news at Reuters and previously at The Wall Street Journal, Galloni takes the helm as the agency faces an array of challenges. Some of these are common to all news media. Others are specific to the organisation’s complexity: With a worldwide staff of some 2,450 journalists, Reuters serves a range of divergent customers and is also a unit in a much larger information-services business.

Since 2008, Reuters has been part of Thomson Reuters, a corporation with more-lucrative and faster-growing segments than news. Its chief executive, Steve Hasker, who joined last year, has focused on aggressively expanding the corporation’s three largest businesses: providing information, software and services to lawyers, corporations and the tax and accounting profession. Hasker’s strategy has helped boost Thomson Reuters stock to all-time highs.

Reuters comprises about 10 per cent of Thomson Reuters’ total $5.9 billion in revenues. Unlike many news organisations, Reuters is profitable. But it is also a drag on the parent company’s revenue growth and profit margin, analysts say, and the executive who runs the news business, Reuters president Michael Friedenberg, is pushing to increase sales and boost profitability. Looking forward, Thomson Reuters’ chief financial officer last month forecast that sales at its “Big Three” businesses are expected to grow six per cent to seven per cent in 2023, while its news division and printing business “are expected to dilute organic revenue growth by about one per cent to two per cent.”

Thomson Reuters is hoping for a turn-around in the Reuters Events business, which it acquired in October 2019. Almost all in-person conferences last year were cancelled or postponed because of the COVID-19 pandemic. But the business has pivoted to a hybrid events strategy for 2021 with both in-person and virtual conferences, and expects its revenues to improve.

While some in the industry have speculated that Thomson Reuters might want to sell the news division, three analysts said they do not expect a sale. Douglas McCabe, a media analyst with Enders Analysis in London, said Reuters is “a tremendously powerful part of” the Thomson Reuters brand, and that “the mighty Reuters newsroom behind you and all the really specialised business assets is a great combination.”

In a statement, CEO Hasker said: “Thomson Reuters is committed to the future of Reuters News. It is an important part of the company and is valued across our customer base. The last year has proven beyond question the value of independent, global, unbiased journalism.”

This year saw the closing of a deal in which the former Financial and Risk business of Thomson Reuters - now called Refinitiv - was sold to the London Stock Exchange Group in a $27 billion all-stock deal. Under the terms, Reuters News is guaranteed annual payments of at least $336 million to provide news and editorial content to Refinitiv until 2048. That stream of revenue is envied by many in the media industry.

Galloni has told colleagues that one of her critical tasks would be maintaining a good relationship with Refinitiv, as it is Reuters’ biggest customer, accounting for slightly more than half of the news agency’s $628 million in revenues last year.

The important relationship has been a source of some tension, senior editors say. As part of the contract with Refinitiv, Reuters is required to meet strict performance targets for the news coverage that Refinitiv clients receive, which Reuters has exceeded so far. Thomson Reuters, for its part, noted in its latest annual report that the exclusive deal, while lucrative, limits Reuters’ ability to sell to other customers in the growing financial-services industry. A Refinitiv spokesman declined to comment.

Gordon Crovitz, a former publisher of The Wall Street Journal, said the new editor will nevertheless have to find new sources of revenue. “Reuters is in an unusual position because the pledge from Refinitiv frees Reuters News up to be more aggressive in creating new news products to serve new markets,” he said. “I think there’s still a lot of low-hanging fruit for Reuters because of the strength of the brand and the size of the staff.”

Reuters’ primary competitors include Bloomberg News, the Associated Press, French news agency AFP and visual content provider Getty Images. In addition to its events business, Reuters has been seeking other growth opportunities. Prominent among these is the upcoming launch of a revamped website that is expected to target professionals and eventually begin charging for content.

McCabe said convincing consumers to pay for content is challenging because “Reuters is a brand that a lot of people recognise but don’t intuitively go to.” But he is more optimistic that targeting professionals could succeed for Reuters. “All the evidence says to me that these are the subscription models that really work,” he said.

Hasker has told colleagues that he wants to make Reuters more integral to the company’s other divisions. To that end, the newsroom recently added to its legal reporting staff.

Adler spearheaded a number of moves to modernise Reuters. In the past decade, it created teams of investigative, data and graphics journalists, and is using artificial intelligence to speed the delivery of certain breaking financial news.

Hasker has said he is eager to continue modernising the newsroom by getting it to embrace new technologies more aggressively. He and Friedenberg considered a wide range of journalists to succeed Adler, both inside and outside the news agency, according to people familiar with the matter.

Galloni, based in London, is known internally as a charismatic presence with a keen interest in business news. She has told colleagues that her priorities would include boosting the Reuters digital and events businesses.

She takes the helm after serving as a global managing editor of Reuters, overseeing journalists in 200 locations around the world. At the beginning of her career, she worked at the Reuters Italian-language news service. She received degrees from Harvard University and the London School of Economics. She returned to Reuters in 2013 following about 13 years at The Wall Street Journal, where she specialised in economics and business coverage as a reporter and editor in London, Paris and Rome. ■