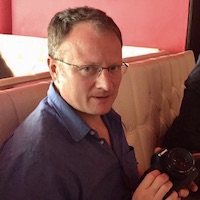 Andrew Winning, a 22-year Reuters veteran and one of the most talented news agency photo journalists of his generation, died in London on 3 August of brain cancer. He was 49.

Andrew was a fiercely competitive photographer and photo editor who covered every type of major story in his career, from wars and earthquakes to Olympic Games and World Cup soccer. Nothing gave him more pleasure than celebrating with his colleagues after winning multiple front page photo credits with a big story.

At heart a family man, he loved to cook a big Argentine-style barbecue for his family and friends, always ready to discuss the latest breakaway in the Tour de France or the emerging talent on the drum and bass music scene.

Andrew was quietly spoken with a keen sense of humour. Fluent in Spanish and French, he had a natural ability to pick up accents and mimic the pompous. He embraced the big, warm family traditions of his Argentine wife Laura Saravia. Their home in Dulwich, southeast London, with two teenage sons and a stepdaughter, was constantly heaving with dinners, birthday parties, celebrations of all kinds.

Andrew Baird Winning was born in Paris on 22 September 1970 at the Hertford British Hospital in Levallois-Perret. He was the eldest of four brothers, with Nick, Peter and Chris, sons of Tony and Fay Winning. His father was a correspondent with Reuters in France at the time.

Andrew followed his father into Reuters as a news photographer rather than a writer. After primary school in Paris, Saint Michael’s in Madrid and Dulwich College, and a Spanish and business degree at Bradford University, he got his break in news photography with the legendary Johnny Eggitt at Agence France-Presse, in London.

After learning the tricks of the trade from one of Fleet Street’s finest, Andrew joined Reuters in 1996 as chief photographer in Mexico, Central America, Colombia and Venezuela. Based in Mexico City, he covered wars, disasters, coups, sport for the next 12 years. His strength was spotting talent and building strong teams throughout his region.

He met Laura, a television producer with NBC, while they were both covering a big embassy hostage story in Peru. Their two sons Santiago and Liam were both born in Mexico City and his stepdaughter Luciana is from Laura’s first marriage.

The family moved to London in 2008 and settled in Dulwich, near his parents. He was senior photographer in the Reuters London news pictures bureau and then editor in charge of the London international pictures desk, a job which gave him the scope to use all his talents as an organiser and editor of Reuters photo coverage.

Early in his career, he was one of the very few Reuters people to get a byline in the august French newspaper Le Monde for his coverage of the 1998 world cup in France - which France won. Le Monde, which at the time published few photos, had taken the Reuters pictures service especially for the world cup.

To his great regret, Andrew left Reuters at the end of 2018 in one of its cost cutting exercises. But his sadness at leaving was short lived, when he was offered his dream job by Getty Images, news editor for Europe, Middle East and Africa.

Then, less than three months into the new job, which he loved, he was literally felled by a malignant brain tumour . He underwent surgery, radiotherapy, chemo and immunotherapy to try to stop the cancer. He managed to work on for months, despite the debilitating treatment. But little by little his condition worsened.

Andrew was a photographers’ photographer, who brought on and trained a new generation of agency photographers. He liked nothing better than to invite all his pictures colleagues to his home, cook them a big barbecue with Laura providing the Latin American specialities, and chew the fat over their latest triumphs and disasters. “I like shooting human stories where there are no barriers between the photographer and the subject matter,” Andrew said in his Reuters Wider Image profile.

Journalist friend Henry Tricks of The Economist, in a last letter to Andrew, said: “I’ve always loved those “eruptos” of laughter of yours: it’s not just good humour, it is laced with a bellyful of wisdom and worldliness. Why, I often think, do they not just get the photographers like you to tell the stories?“

Ken Mainardis, global head of content at Getty Images, said in a message of condolence: “I was so happy to have Andrew join our team and get the chance to work with him again. He had so much to offer journalism.” ■