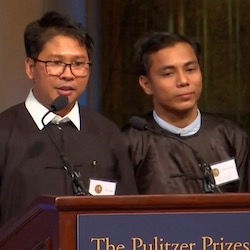 Wa Lone and Kyaw Soe Oo (photo), the two Reuters journalists who were jailed in Myanmar for 511 days on a contested charge of breaking the Official Secrets Act, received their Pulitzer Prize for international reporting on Tuesday.

The award was presented at New York's Columbia University by the Pulitzer Prize Board.

Wa Lone, 33, and Kyaw Soe Oo, 29, had been arrested in December 2017 and convicted last September. They were sentenced to seven years in prison in a case that raised questions about Myanmar's progress towards democracy and sparked an outcry from diplomats and human rights advocates.

The two were finally freed this month.

Before their arrest, they had been working on an investigation into the killing of 10 Rohingya Muslim men and boys by security forces and Buddhist civilians in western Myanmar's Rakhine state during an army crackdown that began in August 2017.

The operation sent more than 730,000 Rohingya fleeing to Bangladesh, according to United Nations estimates.

The report the two men authored, featuring testimony from perpetrators, witnesses and families of the victims, was awarded the Pulitzer Prize for international reporting this month, adding to a number of accolades received by the pair for their journalism.

Government spokesman Zaw Htay said the decision to release the two was made after the families wrote to government leader Aung San Suu Kyi.