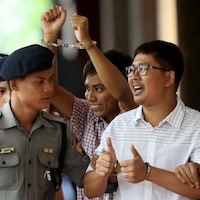 It is a George Polk Award in the Foreign Reporting category, presented by Long Island University in the United States to honour special achievement in journalism, with particular focus on investigative reporting in the public interest.

The Reuters journalists were honoured for Massacre in Myanmar, an investigation of a massacre of ten Rohingya men and boys in a village in western Myanmar’s Rakhine state.

Wa Lone and Kyaw Soe Oo were working on the story at the time of their arrest. Both men have been in prison in Myanmar for more than a year.

In what has become a landmark press freedom case, the court in Yangon charged Wa Lone and Kyaw Soe Oo under the colonial-era Official Secrets Act and in September 2018, sentenced them to seven years in prison. After an appeal was denied, Reuters filed a petition for revision with the Myanmar Supreme Court.

Previous awards received by the pair include the PEN/Barbey Freedom to Write award, the Osborn Elliot Prize, a One World Media Award, the James Foley Medill Medal for Courage in Journalism, the Don Bolles Medal from IRE, the Aubuchon Press Freedom Award from the National Press Club, a British Journalism Award and a Foreign Press Association Media Award. They were also among those named as TIME magazine’s Person of the Year. ■