UK to press for release of Reuters journalists jailed in Myanmar 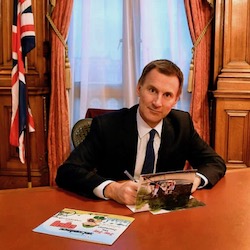 British foreign secretary Jeremy Hunt pledged to make the fight to release of two Reuters journalists imprisoned in Myanmar a top priority for the coming year.

Last week he met human rights barrister Amal Clooney, who is representing Wa Lone and Kyaw Soe Oo, The Guardian reported. She gave him a copy of a children’s book written by Wa Lone.

“It is appalling that these two men have been imprisoned for nothing more than being good journalists and shedding light on the unspeakable atrocities carried out by the Burmese military in Rakhine against the Rohingya people,” said Hunt, who has written a Christmas card to the men (photo).

“My card won’t free them. But I want them to know that they have not been forgotten and that people across the globe continue to campaign for their freedom.”

He said he had given a personal commitment to Clooney that he would marshal the foreign office’s resources to fight for the men’s release. “I want to be absolute clear that the British government will continue to demand the release of these two reporters,” he said.

Clooney has been representing the men since the spring but has only recently begun to make public appearances in connection with the case.

They were convicted on 3 September under Myanmar’s official secrets act and sentenced to seven years in prison. They had been investigating state violence against Rohingya Muslims.

The children’s book, a parable about the value of journalism, tells the story of an inquisitive boy, Jay Jay, who sets out to discover why cattle in his village are falling ill and discovers it is because of pollution from a local factory. ■