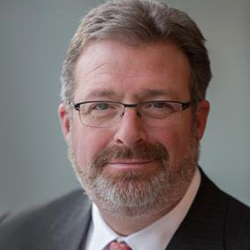 Reuters owner Thomson Reuters reported higher than expected first-quarter earnings and revenue and reaffirmed its full-year outlook of low single-digit sales growth after improved results across all of its businesses.

Sales in the financial and risk division, which accounted for more than half of total revenue, outpaced cancellations, a key indicator of future growth. It was driven by sales in Europe, the Middle East, Africa and Asia.

James Smith (photo), president and chief executive officer, said in an interview with Reuters: “If you look at what’s happening in financial markets in general, there has been a reflection of more optimism than there was at this time last year. While folks are still unsettled about the exact details of what’s to come, I think people are encouraged that the opportunity for change might well create favourable conditions.”

The company beat Wall Street’s expectations as a result of its multi-year plan to simplify its business and focus primarily on organic growth, Smith said.

“We don’t see any reason based on what we are seeing in Q1 that these trends don’t continue throughout the year.”

The company plans to continue to focus on organic growth in four main categories: risk management, global tax solutions, electronic data solutions and legal solutions, he said. “We see lots of runway in those markets we are well-serving.”

The biggest division, financial and risk which provides news and analytics to financial services companies, saw revenue of $1.5 billion, up one per cent excluding currency changes. It was flat when currency changes were factored in to the results.

Reuters News revenues were $74 million, up one per cent.

Cash flow from operations, including those now discontinued, was negative $368 million in the quarter. This was mainly due to a $500 million contribution to the company’s defined benefit pension plan in the United States, $86 million of payments related to $212 million severance charges in large-scale redundancies during the 2016 fourth quarter, and the loss of cash flow following the sale of the IP & Science business.

While the numbers are heartening, it remains to be seen if Thomson Reuters will be able to grow beyond keeping costs low, said Doug Arthur, managing director at Huber Research Partners.

"They are slowly moving toward a growth story on a lower cost basis," he said. "Do I look at these numbers and say ‘victory?'. Not quite yet."

A quarterly dividend of $0.345 per share is payable on 15 June to common shareholders of record as of 18 May. ■