Managing editor Paul Ingrassia returning to US ahead of retirement 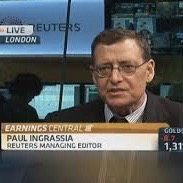 Reuters managing editor Paul Ingrassia (photo) is returning to the United States from London ahead of his retirement.

His move next month was announced by editor-in-chief Stephen Adler who wrote that Ingrassia had “served so brilliantly as managing editor for nearly five years”.

He will work on special projects ahead of his retirement in April 2016.

In a memo to editorial staff, Adler added: “Spoiler alert: these projects may have something to do with motor vehicles.” Ingrassia is a keen fan of cars, to the point of having models of some favourites on his desk.

“We will have plenty of time to roast, toast, and otherwise cheer on our departing ME,” Adler wrote. “For now, let me just say that Paul has brought to his role extraordinary knowledge and impeccable news judgment, along with an irrepressible passion for journalism. He cares about both people and ideas, is a terrific teacher and a straight shooter, and has been the ideal partner to me in my role. When the time comes - though not just yet - we will sorely miss him.”

The promotion of Galloni to global news editor, a new position with a full-time focus on the global dimensions of stories Reuters covers, was announced in July. It takes effect in January and she will be based in London.

She joined Reuters in 1996 for the Italian-language service in Rome, covering politics and the economy. She moved to The Wall Street Journal in 2001, spending 12 years there as a correspondent in London, Paris, Milan and Rome, and returned to Reuters in September 2013. ■