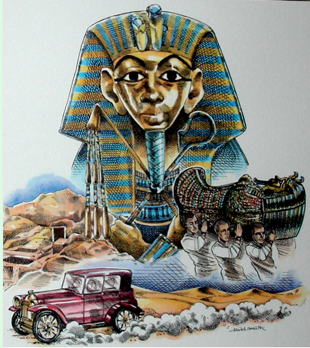 A golden rule, if the story is important, is to ensure communications in advance. This explains the new car, the old car, the Nile felucca (small cargo vessel propelled by oars and sail) and the six fast donkeys Reuters assembled near Tutankhamen’s tomb.

The story was not only important but was exciting the public of many countries because of the fascination of buried treasure, the royal rites of a lost age, and the thrill of suspense.

Was Tutankhamen, the young pharaoh who ruled Egypt more than 3,000 years ago, still in his grave beneath the dust and heat of the Valley of the Kings? If so, he was the only pharaoh in the Valley whose mummy had escaped the depredations of grave robbers and he might furnish priceless evidence about the culture of ancient Egypt.

Newspaper readers everywhere were avid for news which archaeologist Howard Carter and his patron, Lord Carnarvon, were about to provide in February 1923. Reuters sent Valentine Williams, brother of Chief Editor Douglas Williams, to Egypt as its special correspondent.

A plum assignment, on the face of it; but there was a snag. Carnarvon had sold exclusive rights to information about the tomb to a British newspaper.

As preparations to pierce the burial chamber advanced, the pitch of public interest touched new heights. Luxor, just across the Nile, enjoyed the boom. The Winter Palace Hotel had its most glittering season ever.

One Monday Carnarvon, less secretive than usual, said the burial chamber would be opened the following Sunday watched by the Queen of the Belgians, then visiting Egypt.

Well now - does one open a chamber, sealed for many centuries, before a queen without making certain that the occasion will not be a flop?

The secret was out… the world knew that Tutankhamen, archaeology's newest sensation, was safe in his incomparable shrine

Someone, surely, would take a preliminary peep; but when? Friday, Williams decided, was a likely day. It was the Moslem day of rest and a good day for secrecy.

How to get the news and how to transmit it fast? Williams tackled the second problem first.

The nearest telegraph office to Tutankhamen’s tomb was some way from the landing stage of the Winter Palace Hotel. To cross the Nile took 20 minutes; but it was a six-and-a-half-mile donkey ride to the river from the tomb.

Williams telephoned Reuters Cairo office to buy a car, and sent it and a driver to Luxor by rail, as there was no road in those days. It arrived on Wednesday. Under cover of night 20 Egyptians manhandled it to the Nile, levered it on to a felucca and hid it in the rushes on the western bank.

As an insurance against something going wrong, Williams hired six fast donkeys and their donkey boys for the day, but there is no record of whether they were used.

Last links in the chain were a felucca for exclusive Reuter use, and an ancient T-type Ford car with only three tyres, destined to carry the news flash from the Nile to the telegraph office. The owner used rope instead of a fourth tyre.

Only the news was lacking! Williams prepared two urgent cables with the alternatives: ‘Tomb empty’ and ‘King’s sarcophagus discovered’.

The archaeologists usually worked only in the mornings. They arrived on Friday, locked the tomb at lunchtime and disappeared. The journalists waited, and this time the archaeological team returned with Carnarvon and important-looking Egyptians. Reuters new car was concealed behind a rock. Soon heavy thudding noises came from the tomb. Then a long, nerve-straining silence.

Suddenly Carnarvon shot like a rocket from the dark entrance;; pale as death; sweat running down his face. With shaking hands he lit cigarette, took three puffs, flung it away and strode back into the tomb. Still no news.

Soon afterwards an Egyptian emerged, very stout and requiring, for modesty, the shield of a nearby rock. One of Howard Carter’s men was with him, presumably to ward off contact with the Press, but discreetly remained in the entrance to the tomb.

Out of sight from the tomb, Williams intercepted the Egyptian, bowing as he removed his sun helmet. “Is it true, Excellency, that they have found two sarcophagi?” he asked in French, language then of polite Egyptian society.

“Quite plain, they tell me.”

“No, no. It is magnificently decorated. All blue and gold.”

The secret was out. The new car bumped over the rough track to the Nile. The felucca and the rope-shod car did their job and, before the experts had left the tomb, the world knew that Tutankhamen, archaeology’s newest sensation, was safe in his incomparable shrine.

Though unaware of it at the time, and thinking to use flattery, Williams had been right to address the obliging Egyptian as Excellency. He was, in fact, a pasha.

Thank you, Your Excellency, Chairman of the Sudan Irrigation Board. Thank you for a momentous Reuter scoop.