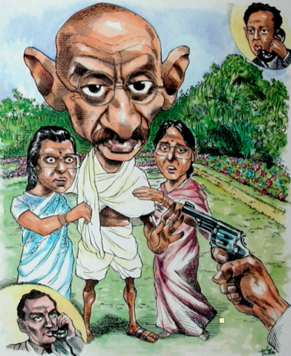 Reuter journalists know how to handle news. But when it is big news, supreme news, the heart beats faster, the senses sharpen, and nothing matters except the breaking story.

Who was the caller? Could he be trusted? Had the shots killed the father of Indian independence?

At the receiving end of the telephone Doon Campbell, a correspondent already tested in the wartime Allied landings in France, needed a few seconds to identify the voice. Then all was action.

Campbell was also insistent. “Is he dead? Is he dead?”.

At the cable office, from the clerk’s anxious query “Is it true?”, Campbell learned that Reuters led the field. Indeed it was all too true. Soon Mahatma Gandhi was dead and the news from New Delhi landed in the Fleet Street Head Office almost simultaneously with the special announcement over All-India Radio.

Campbell’s first “flash” had given Reuters a news beat of seven minutes over all rivals with the Mahatma’s shooting. This beat and the subsequent radio-monitoring lead of 16 minutes with the actual death placed the Gandhi story in the honours list of remarkable Reuter scoops of the past 137 years.

Whose, then, had been the whispering voice on the telephone? “Roy speaking,” it had said.

Roy, of course, is a common first name to western ears but this was P.R. Roy, a reporter quite new in the office of A.P.I., the Associated Press of India, the Indian-run domestic news agency, then owned by Reuters, which later became the Press Trust of India (P.T.I.).

Campbell worked from the A.P.I. office in New Delhi and had seen Roy, whose name momentarily escaped him, leave for the nightly prayer meeting Gandhi held in the garden of Birla House, the mansion where he occupied a room furnished with a simple cot and a spinning wheel.

when it's big news the blood runs faster, and nothing matters except the breaking story

“Phone if it’s hot,” Campbell had asked, referring to the news, not the weather. He urged the young Indian to watch for signs that Gandhi might start another of his fasts, staged to calm communal strife or ease the lot of Untouchables, whom he had renamed Harijans, Children of God.

In the mansion garden 500 devotees waited for Gandhi. They parted to let him pass to the dais where, normally, he addressed the assembly. Still weak from a five-day fast for Hindu-Moslem unity, he was supported by two grand-daughters, one on each side.

As he advanced a young man approached, whipped out a pistol and fired at point-blank range. Blood stained the front of Gandhi’s homespun garment and he fell, raising his hands in a gesture of Hindu salutation.

Roy wasted no time. With the evidence of his eyes to rely on and the pistol shots echoing in his ears he dashed to Birla House, seized a telephone and dictated the scoop of his life... “Man fired four shots at Gandhi... worst feared.”

Others clamoured for the phone. But when it’s big news the blood runs faster, and nothing matters except the breaking story. “Don’t interfere with a C.I.D. man,” he snapped and held on to his link with Reuters. The C.I.D., the Criminal Investigation Department, was not to be trifled with. Nor was P.R. Roy, who now lives in retirement in Calcutta.

Campbell was later Editor and Deputy General Manager of Reuters.