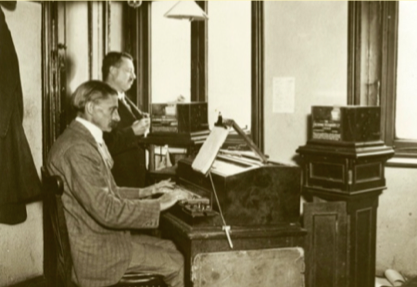 The night shift of 14 April 1912 was turning out to be what might be termed a “slow news night” for the three people on duty in Reuters’ editorial room at Old Jewry in the City of London. One man was asleep in a small outer room; another was cleaning the “manifold machine” and was covered up to his elbows in ink. The third occupant of the room - 14-year-old Leslie Smith - was practising his typing skills on the Exchange Telegraph tape machine.

Smith had joined Reuters the previous year as a messenger boy employed to deliver back-up copies of messages previously telegraphed to newspaper offices and other subscribers around the City and Fleet Street via the ExTel machine. After winning the princely sum of £1 as Reuters’ tidiest messenger boy of the year he had been promoted to the Manifold Department. Here, messages delivered by the boys were typed first on wax sheets and then reproduced via stencils on a “manifold machine”.

One of Smith’s jobs was to cut out Reuters Special items from the daily newspapers and paste them in a book. Correct invoices could then be sent out to clients. But Smith was a young man with ambition. He already had his eye on the ExTel tape machine in the adjacent room and hoped one day to master its complexities. “The machine,” Smith told us in letter written to Reuters in his 80th year, “was like a harmonium and on the keys were letters, numbers 1-9 and other symbols. These I studied carefully so that I could make words up in my mind. I asked the operator if he would teach me to use it and he suggested that on our next night shift he would teach me. The night shift was from 10pm to 6am and was usually a quiet period.

“I therefore took every opportunity of going into the tape machine room and studying everything the operators did. On a quiet night I asked the operator if I could pretend to send a message without switching the machine on.”

To Smith’s surprise, the operator agreed. Gradually, as he became quicker, accurate and more confident, he was handed small news items which, under supervision, he was allowed to actually send out to subscribers.

As Smith recalled, “I think it must have been about 2.30 or 3 am when the night editor - I think his name was Mr Gibson - came up to our department with a slip of paper saying it was very special and must be dispatched immediately. Well, what to do? I spoke to the chap cleaning the machine whose hands and arms were covered with ink who obviously could not work the tape machine… and the other chap was fast asleep. So I told them I would send the message and I was completely able to do so. While they watched I sent the following message as a near as I can possibly remember it:

“Reuters - It is reported that the White Star liner ‘Titanic’, has struck an iceberg about 500 miles off Newfoundland.

“The Cunard liner ‘Carpathia’ has picked up her S.O.S. and is racing to rescue. Stop.”

Smith added modestly: “Later, as the other news came in, it was transmitted by the men. For myself, it was all in the day’s work, and I thought no more of it.”

In spite of his efforts to become a skilled Reuters telegraphist, destiny had other plans for Leslie Smith. Volunteering for military service in the Great War on his 18th birthday, he was demobilised early in 1919. He re-applied to Reuters and was offered his old job back again but at the same salary which he had received before he joined up. He decided to reject the offer and, after a spell looking for a job, eventually went on to have a long and quite different career with London Transport.

The photograph, taken in 1923, shows the ExTel tape machine in the same position at Old Jewry, and still in use. It was via this machine that Reuters transmitted the first news of one of the most infamous disasters in maritime history - ironically, using the newly-acquired skills of a 14-year-old office boy. ■