Half a century ago, a young Reuters correspondent in Africa went missing. The correspondent was a woman - rare enough in the 1950s when the mindset of many within Reuters was weighted by social convention against female staff, says Reuters archivist John Entwisle. She was found within days, but the episode set back the promotion of women for years. 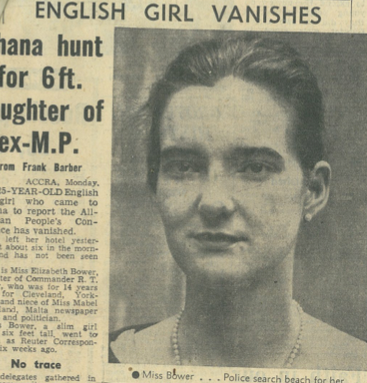 Elizabeth Bower was 23 when she joined Reuters as an editorial trainee in 1956. As the daughter of Commander Robert Bower, a member of the British parliament, and niece of the redoubtable Mabel Strickland, owner of The Times of Malta, she was well connected. While staying with her aunt in Malta she had served as a sub-editor on the Sunday Times of Malta. Returning to her native Cumberland in the north of England, she worked as a reporter on the Cumberland News for two years. The paper’s owner, Sir John Burgess, recommended her as a Reuters editorial recruit. She was, he wrote, “a nice girl and wants to make journalism her career”. Would he have used quite the same wording if introducing a hopeful young male recruit? This was 1956, remember, and Burgess was close to Reuters. From 1959 to 1969 he was non-executive chairman.

After two years, a vacancy arose for the important position of Reuters staff correspondent in West Africa, based in Accra, capital of newly-independent Ghana. Both Tony Cole, editor-in-chief, and Sir Christopher Chancellor, chief executive, were both unusually free from prejudice against women. They felt that Bower was the right candidate for the job. Cecil King, a director of Reuters and owner of the Mirror group (which included the Accra Daily Graphic), thought they were mad to send a young woman to such a location, and told them so.

Cole, father of two daughters, saw things differently, as did Chancellor. He had met his wife, Sylvia Paget, a great-niece of British Prime Minister William Gladstone, when both were undergraduates at Cambridge. Son of a colonial administrator who became governor of Palestine (and grandfather of actress Anna Chancellor), he was by background and social level isolated from the then conventionally-held view of a wife as someone who cleaned his house and cooked his evening meal. That was what one employed a cook and servants for.

Bower arrived in Accra on 23 October 1958. Things proved difficult from the start. Finding somewhere to live and report from was immensely challenging. Her first assignment was a major one - the All-African People’s Conference. She moved from hotel room to hotel room. She felt continually unwell, found the heat a problem and had trouble in sleeping.

On 8 December she went missing.

Several people came forward to say that, on the previous day, they had seen her wandering around in a rather strange manner. The story of her disappearance became a major news item in its own right right - at least back in Britain. Search parties were organised, beaches were combed. People started to fear the worst. It became Ghana’s biggest-ever hunt for a missing person. For Reuters, the publicity was a disaster.

Three days later, she was found. A local taxi driver spotted her lying unconscious by the roadside in a remote bush area, near Koforidua, about 46 miles north of Accra. Apart from having gone without food for more than 24 hours, being covered in ant and mosquito bites and suffering from total memory loss, she was unharmed. She appeared to have suffered a breakdown. Within a short time she was on a plane back to England.

Cecil King said “I told you so”. Irritated by the Bower fiasco - amongst  other things - he resigned from the Reuters board in January 1959.

In 1960 Bower resigned from Reuters and returned to The Times of Malta.

Within Reuters, there was absolutely no doubt that the Elizabeth Bower affair set back the promotion of women. Several retired employees from that era have ventured to me their opinion that the effect lasted a minimum of 20 years. This has to be viewed within the context of the time. By no means were Cole and Chancellor blameworthy - except that they sent the wrong woman.

PHOTO: How the story of Elizabeth Bower's disappearance was reported in the News Chronicle on 9 December 1958. ■