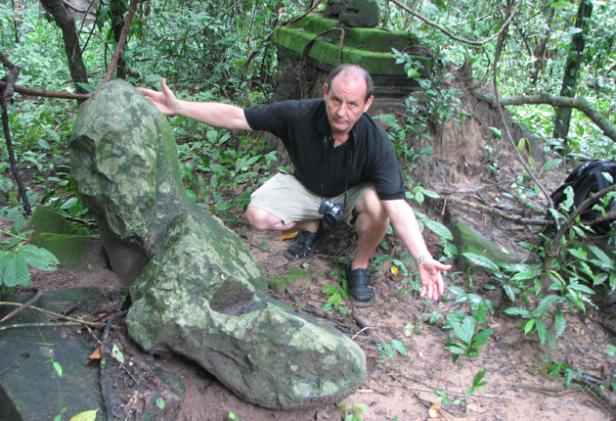 Peter Sharrock, Vietnam War correspondent turned archaeology professor, has been compared with Indiana Jones for his discovery of part of a 12th century Buddhist statue in a Cambodian jungle.

"It sounds like the plot of an Indiana Jones movie: an archaeology professor with little more to go on than a yellowing photograph discovers part of a 900-year-old statue deep in the Cambodian jungle, rewriting history in the process," The Independent reported on Saturday.

Sharrock, a senior teaching fellow in the art and archaeology of Southeast Asia at the University of London's School of Oriental and African Studies, was at a conference in Cambodia in July when he decided to spend a day searching the forest around the ruins of Angkor.

His aim was to locate the missing giant legs of an eight-headed, three-metre high sandstone statue of Hevajra, the war-like, tantric Buddhist deity. The statue's intricately carved bust was excavated and salvaged in 1925 by French archaeologists who sold it to the Metropolitan Museum of Art in New York where it has been on display ever since. The rest of the statue had not been found - until now.

Sharrock and his friend David Green trekked into the forest outside one of the ancient city's gates "where no tourist goes". He cannot reveal the exact location of the site due to fears of looting.

"There was no road, only a sort of animal track into the forest," he said. "It was pretty unpleasant. There were snakes all over the place, and in the back of my mind was the knowledge that the Khmer Rouge had planted land mines all over Angkor. "We went on and on, and were about to give up, when finally I spotted something through the trees. We strode through the creepers and thorns, and I realised that I'd seen the carved square corner of the statue's pedestal. And lo and behold, there were the legs lying beside it."

Many parts of the statue, including all 16 of its arms and one of its heads, are still missing but the Cambodian government has now pledged to excavate the site. The legs are now in the care of the Sihanouk Angkor Museum in Siem Reap, but experts hope they will be reunited with the bust in New York.

Hevajra would have been venerated during the reign of Jayavarman VII, emperor of the Khmers at the height of their power, but it is likely the statue was broken up and dumped outside the city walls during a revival of Hinduism in the 14th century. This theory undermines the view that the Khmers followed a compassionate Buddhist philosophy. "It's something of a tectonic shift in archaeology", Sharrock said. “This is a unique statue which I estimate to have been of exceptional importance in the time of King Jayavarman VII.”

Sharrock covered Indochina for four years and discovered how the region "attaches to the skin". The war put the large Angkor temple complex out of reach and this was prolonged as Cambodia closed on itself and suffered the excesses of  Pol Pot. He finally reached Angkor in 1990, when landmines abounded and control of temples passed daily between the government and the Khmers Rouges.

Sharrock’s doctorate is on a new interpretation of the Buddhism and imperial politics of Jayavarman VII (1125-1215), the greatest king of ancient Cambodia. He is now focusing on the evidence in Indochina for the influence of tantric or esoteric Buddhism, developed in the great monasteries of the Ganges valley and diffused and developed in different ways through much of Asia. ■