At the eye of the storm: Reuters' White House correspondent 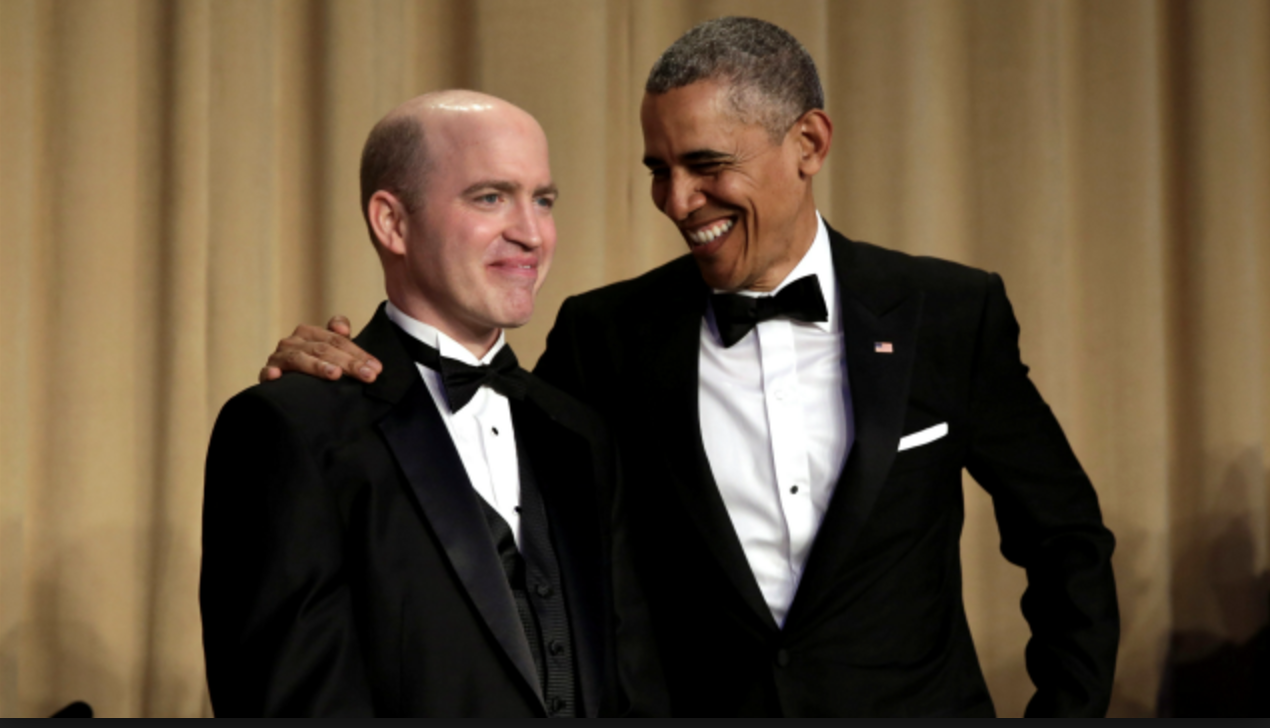 Reuters' White House correspondent Jeff Mason (photo with former President Barack Obama) is at the centre of a maelstrom over the Trump administration’s treatment of the press.

It’s happening as movers and shakers of the American media, politics, business and entertainment worlds prepare for a highlight of the Washington social calendar - the White House Correspondents’ Association (WHCA) annual dinner.

This year’s black tie event at the Washington Hilton is booked for Saturday 29 April. Doubts whether it should go ahead have been cast because of President Trump’s war of words with the media.

Mason is caught up in the controversy because he is the association’s president and host of the bash - when politicians, business leaders and entertainment celebrities are invited to grace the tables of US media outlets.

It’s known as the “nerd prom” and it’s the hottest ticket in town. By tradition, the highlight of the evening is when the president gets roasted.

But with Trump’s running battle against the press, which he terms “the opposition party” and “enemy of the people”, there have been calls either to cancel the dinner or to go ahead without him or anyone from his administration. Other ideas publicly aired: invite actor Alec Baldwin and other Trump impersonators in his place.

Former Thomson Reuters CEO Tom Glocer, responding to a tweet that said: “Maybe think about dis-inviting the White House from your annual dinner,” wrote: “Or just cancel the dinner altogether as I've been advocating for weeks.”

Glocer also tweeted: “POTUS [President of the United States] doth protest too much, but since he doth read too little he won't get the joke. Keep the focus on Russian ties.”

That was in response to another Trump broadside at the media. The president tweeted: “FAKE NEWS media knowingly doesn't tell the truth. A great danger to our country. The failing @nytimes has become a joke. Likewise @CNN. Sad!”

Mason acknowledged that the WHCA had received some queries about the 2017 dinner, which will be the first since the new administration took office last month.

“This year, as we do every year, we will celebrate the First Amendment and the role an independent press plays in a healthy republic. We will also reward some of the finest political reporting of the past year while using our scholarship program to highlight and support up-and-coming journalists who are the future of our profession,” Mason wrote.

“In the meantime, the WHCA will pursue its core mission of advocating for journalists’ ability to ask questions of government officials, push for transparency from the presidency, and help Americans hold the powerful to account. This is a responsibility that we have taken seriously for more than 100 years and will continue to uphold.”

Already sour relations between the Trump administration and the media worsened on Friday when the president told conservative activists that journalists should not be allowed to use anonymous sources, and he repeated his accusation that the press produces “fake news”. At the same time, his press secretary Sean Spicer barred nine news outlets from an informal White House West Wing briefing known as a “gaggle”.
The Committee to Protect Journalists said it was concerned by Spicer’s decision and Trump’s calls for an end to anonymous sources was alarming.
“It is not the job of political leaders to determine how journalists should conduct their work, and sets a terrible example for the rest of the world, where sources often must remain anonymous to preserve their own lives,” said CPJ executive director Joel Simon. “We are concerned by the decision to bar reporters from a press secretary briefing. The U.S. should be promoting press freedom and access to information.”
Mason said the WHCA board which he heads “is protesting strongly against how today's gaggle is being handled by the White House. We encourage the organizations that were allowed in to share the material with others in the press corps who were not. The board will be discussing this further with White House staff.”
Mason has covered the White House beat since 2009. He started his career in Frankfurt where he covered the airline industry before moving to Brussels where he covered the European Union.
Other Reuters correspondents who have headed the WHCA are Caren Bohan, Steve Holland, Laurence McQuillan and Ralph Harris - a British-born journalist who became the first non-American to do so in 1979.

POSTSCRIPT Later on Saturday President Trump announced on Twitter: “I will not be attending the White House Correspondents' Association Dinner this year. Please wish everyone well and have a great evening!"

Jeff Mason said in a statement: ”The WHCA takes note of President Donald Trump's announcement on Twitter that he does not plan to attend the dinner, which has been and will continue to be a celebration of the First Amendment and the important role played by an independent news media in a healthy republic.

"We look forward to shining a spotlight at the dinner on some of the best political journalism of the past year and recognizing the promising students who represent the next generation of our profession.”