A Reuters moment in time 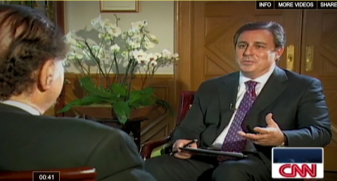 CNN posted part two of a special series on energy by former Reuters journalist John Defterios on Friday. It marks the 50th anniversary of OPEC, the oil cartel which still controls the lion’s share of Earth’s oil. He interviewed Sheikh Ahmed Zaki Yamani, head of OPEC when the 1970s oil crisis struck, reviewing those days and tying what happened then to today’s energy issues. The programme recalled a seminal moment in my understanding of just what it meant to be working for the respected Reuters, Mike Reilly writes.

In 1973, I was a one-year recruit from Associated Press working the financial news desk in New York. Assigned to a series of events outside the office one day, I had three different spots to scramble among in the morning before a scheduled 1:00 pm conference called by Yamani with a select group of individual reporters from just five news organisations. It was a prime assignment and as hot as could be with the world’s focus on every word Yamani spoke as the oil price spiralled higher and higher under OPEC control.

I was so busy on the other assignments that day that I had hardly considered the full import of the news conference and only realised as I boarded a subway from lower Manhattan that it would be tight making my way to the midtown Hilton tower where Yamani was. In fact, I arrived outside a guarded elevator just minutes before 1:00 pm. I hadn’t counted on the security. They gave me an extended pat down.

I was in a sweat as I entered the elevator which seemed terribly slow to rise directly to the floor where Yamani and his entourage were located. The door opened to reveal four more guards, each brandishing an automatic weapon and demanding yet another search.

A moment not to be forgotten.