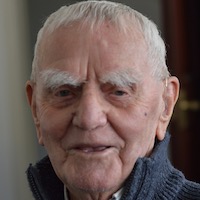 His long service began at the age of 14 in 1929 as a messenger boy delivering stock and commodity information to subscribers in London. He then became a press telegraphist, retiring in 1978 after 49 years with Reuters interrupted only by service as a radio operator with the Royal Navy during the Second World War.

As a messenger, one of his duties was to jump up and down in the street outside Reuters head office, then in Carmelite Street, Blackfriars. When the head of Reuters, Sir Roderick Jones, was leaving the office Burgess had to run out of the building and jump on the rubber pressure pads in the street that were used to count the number of vehicles passing before changing the traffic lights. This ensured that the red light would change to green immediately and Jones’s chauffeur-driven limousine would be spared the inconvenience of having to stop.

During the War, he took part in operations in the Mediterranean, including Egypt and Malta, and the Atlantic convoys, South East Asia, Australia and New Zealand.

After demobilisation in 1945, Burgess returned to Reuters, again as a press telegraphist, moving to the wire room at Comtel - forerunner of Reuters Economic Services - for the transmission of economic news. In the late 1960s he was one of a pioneering team trained to use video terminals to transmit news, a revolutionary concept at that time, instead of teleprinters and punched tape machines. ■