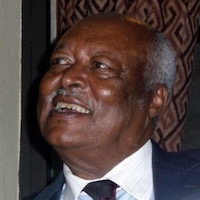 An avuncular presence recognisable by his trademark pipes and fedora hats, he covered every aspect of Ethiopian news - from the imperial splendour of Emperor Haile Selassie to the brutal rule of the communist Derg regime and the ruinous famine of the 1980s.

He later reported with pride on the country's more recent economic transformation, relishing the chance to write about an Ethiopia reclaiming its place as an African powerhouse.

Tsegaye was born in Addis Ababa in 1930 and trained as a teacher but harboured the ambition to become a journalist. He joined the Ethiopian Herald as a fledgling reporter in 1961, eventually becoming the state newspaper's first parliamentary correspondent.

But it was at Reuters, which hired him in 1975 and where he would work for almost 35 years, that Tsegaye believed he did his best work. He became so associated with the agency that many in Ethiopia came to know him simply as "Tsegaye Reuters".

Early on the morning of 22 May 1991, acting on a tip, Tsegaye set off for Bole International Airport in Addis Ababa. He talked his way past the armed guards and was able to watch as longtime dictator Mengistu Haile Mariam boarded a plane and quietly fled the country as rebels closed in on him.

Tsegaye was on the phone to the Reuters regional office in Nairobi as the aircraft took off, filing what would be a world exclusive.

A year later he was on the scene as the body of former Emperor Haile Selassie was exhumed from its burial place under a toilet in his former palace.

He would later recall the moment he saw the iconic ruler's skull - instantly recognisable - and how he had said out loud: "That's him. That's the emperor."

Tsegaye faced harassment, intimidation and death threats during the early years of his Reuters career, but he always insisted the Ethiopian public had a right to the truth.

"You can kill me," he once told an official who threatened his life. "But you can't kill Reuters."

That belief, that the truth would eventually come out, was paramount for him, as was the fairness and accuracy of his reporting. He often referred to it as his “code".

A mentor to local journalists and to colleagues at Reuters and other major media outlets, many referred to Tsegaye using the Amharic word "Gashe", a term of respect for elders that translates as "my shield”.

To those who visited Addis Ababa during Tsegaye's decades as a correspondent, he was a welcoming and encyclopaedic presence, quick to offer wisdom on everything from Ethiopian politics and history to the best place to get a good whisky.

A proud Ethiopian, he cautioned foreign journalists against resorting to clichés and being excessively negative when covering the country, despite knowing his advice would not always be heeded.

He was clear-eyed about its failings, sometimes speaking of his terror the morning he awoke to find his son had been abducted by security forces during the Derg regime. He drove from police station to police station that day before finally finding his boy, and convincing his captors to release him.

Tsegaye is survived by his wife, eight children and three grandchildren. ■