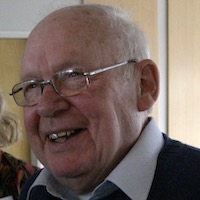 Rick Norsworthy (photo), former editor Asian Services and head of Country Reports, died in St Christopher's Hospice, South London, on Monday after a series of illnesses. He was 87.

Rick, who was born in Savannah, Georgia, had a severe stammer. “I couldn’t talk so I had to write,” he said.

He especially hated making telephone calls for work - “My greatest enemy was Alexander Graham Bell ... The inventor of the telephone was the world’s biggest son of a bitch.”

Rick had a variety of jobs before journalism. He worked in advertising, on a sight-seeing boat and as a basketball and swimming teacher, before becoming a copy-boy at the International News Service (INS, which was eventually to merge with United Press to form UPI). From there he joined local newspapers in Virginia and New Jersey.

In 1963 he saw an advert in New York for sub-editors to work on the Reuters North American desk in London - Nordesk - and got the job.

Soon after arriving in Britain he met his wife-to-be Mary, a singer and entertainer. Four years later, he moved to London Bureau.

Rick was sent to Northern Ireland to report on the Troubles after the Reuter correspondent there was injured and he stayed on for two years.

At the time Rick had stopped smoking. He was standing in a group of journalists waiting tensely for a bomb to go off down the road when he found a lighted cigarette in his hand. He had unconsciously bummed it off one of the other hacks. He went straight back to smoking full-time.

Rick went back to London and then in 1973 was posted to Singapore as Editor, Asian Services. One of the aspects of that job that delighted him was having a secretary to make his phone calls. “The National Heath Service should issue every stammerer with a secretary,” he said.

After the Vietnam War, Rick went back to London, then to Washington, DC. Two years later he returned to London and the Features Desk. Then he took over Country Reports, a new screen service which gave clients detailed and updated portraits of any given country.

Three years later the service was turned over to a subsidiary company. Rick, who was 58, decided to retire.

After retirement, he carried on working with the Reuter Foundation for several years, training journalists. It was a job he loved.

When he finally left his training role, Rick undertook voluntary work in Trinity Hospice’s Clapham, London, shop. His failing eyesight made it too difficult for him to continue there. But he was able to volunteer for several years at the London branch of l’Arche, a charity which supports adults with learning disabilities to live in the community.  ■