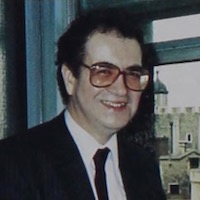 Douglas Learmond (photo), who has died at the age of 74, spent his entire career with Reuters as a commodities specialist in London.

John Bartram recalled: “I worked with Doug in London on the desks for a few years and will always remember him with affection. He could seem quiet and unassuming but he was highly professional and fiercely determined to do the very best for Reuters. Personally, he was one of the kindest men around, always thoughtful and helpful and he managed his health issues without a word of complaint. Some people were colleagues, but Doug became a friend to many and will be deeply missed by us all.”

In retirement to the west of England, Learmond took great interest local history and became chairman of a small local museum in Bruton, Somerset.

He died peacefully in Somerset on 16 April after many years of ill health borne with courage and stoicism. He was both frustrated and amused by being described by the medical profession as "a complex case".