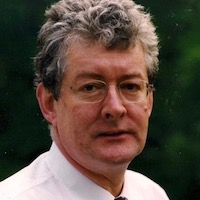 John Adams (photo), who died on Thursday aged 67, joined Reuters in 1972 as part of the team that built the original Reuter Monitor, a screen-based foreign exchange retrieval system that would be the springboard for Reuters' financial success.

His party trick was to enter the PDP8 boot loader program in the blink of an eye, Trevor Bartlett writes. This involved remembering more than 64 digits in base 8 notation. Each digit needed three switches to be set in the correct up/down position. One mistake and you started again. He went on to lead the Monitor development team. The PDP8 front panel stands proudly in his home workshop.

Potential customers often balked at the idea of installing Reuter Monitor terminals with a PDP8 control computer. A gentleman who oversaw technology imports to Brazil claimed "we have a PDP8 for airline ticketing, why can't you use that?". Before a demonstration of this system, John was able to enter some commands on the computer console, surreptitiously, putting the Brazilian PDP8 into a spin. The demonstration failed and Reuters won the contract to install Monitor terminals.

He was one of the few people to extract themselves successfully from technical development. With his keen sense of humour and sharp commercial mind, he was readily able to adapt to his role as marketing director for Asia. Later he progressed to country manager for Australia, and then Canada. Subsequently he became vice president of marketing for North America. Business thrived under his leadership. He returned to head office to be in charge of global accounts - Reuters key customers. His negotiating skills proved a great asset. He always drove the hardest bargain for Reuters. Finally, he was responsible for setting commercial policy and product pricing.

John was an excellent tennis player, feared on the court by his equally able teenage son. Heinrich Wenzel recalls a match played at noon in 40C heat, somewhere in the Middle East. It confirmed the locals' suspicion about Englishmen. John retired in 2001 to exercise his passions for gardening and horse racing. He enjoyed spending time at home in Dorking with his wife Vivian, his children Ben and Emily, and his Yellow Labrador Charlie. Having touched most parts of the Reuters empire, he was loved and appreciated by friends and colleagues worldwide.

Sir Peter Job, formerly chief executive, writes: “John was an unusual person and a delight to work with, quick-witted, cheerful and ingenious. The challenge was to keep pace with his lateral thinking.”

The funeral will take place on Thursday 20 December 2018 at 1:00 pm at St Barnabas Church, Ranmore Common Road, Dorking, Surrey RH5 6SP followed by a reception at The Burford Bridge Hotel at the foot of Box Hill, Dorking RH5 6BX from 2:00 pm to 5:00 pm.

RSVP to trevorbartlett@yahoo.com if you are planning to attend, ideally by Friday 14 December. ■