TV app aims to make Reuters 'greatest, most objective' as well as largest 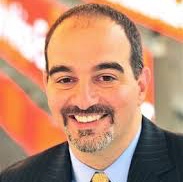 Reuters' new TV app for Apple's iPhone launched this week is part of a strategy to make it "the greatest, the most objective" in addition to being the largest news the organisation in the business, the product's executive editor said.

“We have a great brand name within this business, but we do want a bigger consumer footprint,” said Dan Colarusso (photo). “And we do want people to come to recognise that Reuters, in addition to being the largest news organisation in the business, is the greatest, the most objective.

“We want the world to know that in a more obvious way, and on the web it’s hard to carve that kind of presence because there’s so much noise, so we feel this app goes a long way in positioning us as that.”

Colarusso said he is not worried about competition from similar attempts by companies such as CNN, CBS or Al Jazeera to launch apps which deliver curated content in a way that is meant to make getting the news easier.

“Reuters has made attempts to go directly to consumers before, so this is not new,” said Chris Roush, business journalism professor at the University of North Carolina. “What is new is that it is doing it through smart phones. I like Reuters TV because I believe that in the future all of us will get our news primarily from a hand-held device.”

He added: “I don’t see this as ‘television’ per se. I see this as providing video content, which every major business news organisation is now doing more and more. You go to the Wall Street Journal website, and it has video content there almost every day.”

“The collaboration across this has made this product greater than the sum of its parts,” said Colarusso, “And that’s the collaboration every media business is looking for these days, because our audience has gotten fragmented, our distribution has become uncertain and shaky - the business I mean, not Reuters. So in all this what you need to do is to combine your assets into greater pieces, and that’s what we’ve been able to do here.”

Colarusso was speaking in an interview with the World Editors Forum of the US-based World Association of Newspapers and News Publishers. ■