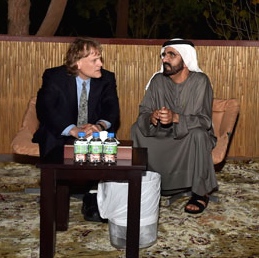 Thomson Reuters plans to expand its staff in the United Arab Emirates, chairman David Thomson told the ruler of Dubai during a visit to the Gulf (photo).

The company employs more than 350 people at its regional office in Dubai.

The meeting touched on relations between the UAE government and Thomson Reuters and ways to boost cooperation and exchange of expertise, the news agency reported.

It also said Thomson Reuters was looking forward to developing investment projects with the government and media sectors in Dubai in the light of the emirate becoming the capital of Islamic economy. ■