Justifiably great acclaim for account of life in the occupation

ALAN RIDING - And the Show Went On: Cultural Life in Nazi-Occupied Paris - Alfred A. Knopf - 2010 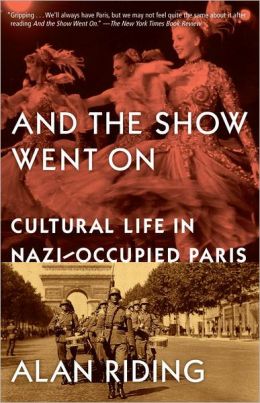 The telephone rang in our house in Opio in the South of France one day in the summer of 2009. “A voice from the past - Alan Riding here.” I had not seen him for over 30 years, when we had last met in Lima, Peru. He was visiting friends in our village, and we agreed to meet outside the church. We sat on a bench and brought each other up to date. I pointed out to him that the area was populated with many Reuter people he might have known when he worked for us: Bob Elphick, Jack Gee, Barry May, Patrick Seale, Gilbert Sedbon, Michael Weigall.

Riding joined Reuters in 1966, working in London, New York and Buenos Aires before leaving in 1971 to join the Financial Times and The Economist in Mexico. This was followed by The New York Times in Mexico, Brazil and Italy. He told me his last job had been European cultural correspondent of The New York Times in Paris. He was now retired and finishing a book: And the Show Went On: Cultural Life in Nazi-Occupied Paris. The book has now been published to justifiably great acclaim: “Engrossing … Rich in detail”, Library Journal;  “fascinating”, The New York Review of Books; “full-blooded and meticulously researched”, Financial Times.

Journalists will naturally be most interested in what he writes about journalists. He discusses their dilemma in the occupation and quotes the satirist Jean Galtier-Boissière: “In the épuration it is the journalist, threadbare and mangy, who is the scapegoat. One forgets that some of them had only their pen with which to feed their family and wrote only anodyne pieces. Does one reproach the workers at Renault for making tanks for the Wehrmacht? Wasn’t a tank more useful to the Fritz than an item in Le Petit Parisien?”

But he reminds us of those connected with the Musée de l’Homme who founded the newspaper Résistance on 15 December 1940. Seven were executed for their journalism on 23 February 1941. Three journalists were shot in May 1942 for planning to bring out the underground Les Lettres Françaises. ■