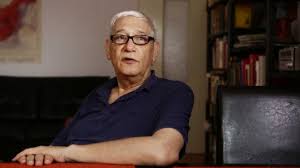 Peter Wolter (photo), a former Reuters journalist in West Germany, had two passions, one public and one private: sailing and spying for the East German Stasi secret police.

His love of the sea prompted him to build a small yacht to sail in international waters. While others of his generation in the years around 1968 took to the streets in West Berlin and other German cities to protest against the US war in Vietnam, fight for socialism or reject compulsory military service, Wolter became a navy lieutenant and combat frogman.

A devoted communist committed to working for “the better Germany”, Wolter acted under the cover name “Oriole”. He was arrested only after his handler changed sides in 1991 and betrayed him to German counter-intelligence.

After a short prison term Wolter was freed on bail and received a suspended sentence for espionage. In court, he admitted he had persuaded an uncle working for counter-intelligence to hand him secret information about the service. Wolter hid the documents in a dead letter box in the men’s room of the Paris-Warsaw Express during stopovers in Cologne.

After losing his Reuters job Wolter founded a magazine in his hometown Münster and worked for a German newspaper in the Canary Islands. In 2004 he joined Junge Welt, a tiny paper published by orthodox left-wingers. In the obituary for “colleague Oriole” journalists praised his professionalism - an ability he had learned from "bourgeois" news agencies.

Two days before he died on 21 November 2018 aged 71 after a long illness, a Russian association of veteran paratroopers awarded him an order for "safeguarding East Germany and the eastern bloc”.

Wolter was not the only Reuters journalist to be involved in spying activities in post-war Germany. John Peet, a bureau chief in West Berlin, defected to East Berlin in 1950. Six days later he told a news conference as “English patriot and democrat” he would no longer serve the interests of “the Anglo-American warmongers" and Reuters was one of their tools. A committed Marxist, he became editor-in-chief for the Democratic German Report, an official East German magazine that appeared until 1977.

Although Peet denied being a spy he later admitted he had been a Soviet agent since serving on the Republican side in the Spanish civil war. A story about his spying activities was first published in the West German weekly Die Zeit in 1989, a year after he died of cancer. ■