Time flies, and it’s about half a century since Bernard Fall, French academic and writer on the lost French war in Vietnam, came to Saigon to take a look at the old battlefields about which he wrote books like Hell in a Very Small Place on Dien Bien Phu, and Street Without Joy, on the earlier French war in Vietnam. 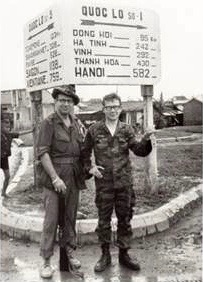 Tragically Bernie died there in early 1967 while on patrol on Street Without Joy when he was hit by one of the most fiendish of Vietnam weapons, a Bouncing Betty booby-trap bomb that jumped up to waist height in front of you and ripped out your guts. Fall perished immediately, along with a US Marine escort sergeant, who was shredded too.

On Christmas Eve, 1966, I had bumped into Fall at the airport in Saigon where we were both waiting for a C130 troop moving plane to take us to the northern warzone.

As the new boy in the Reuters officer I had been ordered by bureau chief Derek Blackman to go up to Danang in northern South Vietnam to monitor the Christmas truce in that sector, which both the Americans and the National Liberation Front (otherwise known as the Vietcong or VC) were supposed to be observing.

I had heard Fall was visiting Vietnam, and recognised him from the Saigon newspaper picture and we were, after all, the only two obvious non-military people on the big troop mover, and we introduced ourselves.

Bernie told me he was on his way to give a lecture on lessons learned during the French defeat in Vietnam in 1954 at the battle of Dien Bien Phu, which ended the French war in Indochina, to US Marine officers in a small position in the Demilitarised Zone (DMZ) between the two enemies. Most Americans ignored the French by now and their views on the current Vietnam war.

After all, the French and their Algerian colonial troops had surrendered at that time, and the Algerian liberation war had commenced towards the end of 1954. It, too, was to end in victory for the Algerians after - as in Vietnam - bloody and protracted fighting.

The area where we were going had seen much activity involving the VC and the North Vietnamese army, but during the truce I, at least, hoped it remained quiet.

Seeing my interest, Fall had invited me to come with him, and I jumped at the chance. As a recent arrival in Vietnam, I thought what a boon this might be in helping one’s understanding of Vietnam and the war.

I thought it showed good sense for the officers here to listen to Fall’s accounts because few Americans thought the French had anything to teach them. After all, they said, the Americans were “winning the war” hands down.

We were both wearing kind of military gear - we had to, as in civilian clothes we would be considered by the VC as possibly CIA operatives, and a sniper might have picked us off in the field

We took a smaller plane further north - in the Vietnam war, correspondents could jump on and off planes and helicopters as they wanted, though that situation did not survive Vietnam.

The Christmas truce, for what it was worth, was on, and we managed to catch a military truck at Dong Ha (see picture of Fall and Pringle) going to Cam Lo south of Highway Nine cutting Vietnam just a few miles below the DMZ.

Bernie was carrying a carbine, which I didn’t think was a great idea, even though it was hardly a lethal weapon, because we had received our accreditation as correspondents and surely academics should have observed the same strictures, by agreeing that we were unarmed, non-combatants.

But I let that pass, though I was unarmed - not that I would have been able to do much even if I had a weapon. The fact is, it wouldn’t have helped us against AK47 assault rifles and the mines.

We were both wearing kind of military gear - we had to, as in civilian clothes we would be considered by the VC as possibly CIA operatives, and a sniper might have picked us off in the field.

Whatever, we reached the US Marine camp without incident as a heavy rain began to fall. Truce or not, I was pretty wary. In a few weeks in Vietnam, I had seen two US soldiers killed west of Saigon by a large mine just after I had passed them to get on their helicopter and file to Reuters in Saigon and saying, what one said in Vietnam, “Hi, how’s it going?” They had just said “Ok, buddy, take it easy.”

A few seconds later, there had been a blast. I looked back at a sky full of earth, and I was thrown to the ground by the concussion. In half a minute, I saw Grunts, as Marines were called, running to pick up the body parts.

I had been on my way to take their helicopter back to file a story on an American operation. Instead, the remains of the two Americans were to go with me too. They had been carrying the command tent, wrapped up. Their weight - they were two big guys - and the tent they had hefted had detonated what was really an anti-vehicular mine. I had walked over it too but was too light to set off this vehicular mine.

The rain began to fall heavily but we got to the camp without incident. I was not invited into the briefing, but Fall had already told me what he was sure would happen in Vietnam (and sure enough it did just as he said). “All this will be turned into rubble,” he noted in Dong Ha, looking around at the small town. “We saw all that in the French war…”

Anyway I was at the Marine base south of Cam Lo for what was the Christmas party that followed. I wasn’t expecting much, and I was right. Fall and I and the officers were under canvas in the rain, looking out, but the low-ranking Marine Grunts stood in the middle of it, water pouring down their miserable faces.

They started the Christmas programme with Jingle Bells, but what I heard them sing was:

VC in the grass

You can take your Merry Christmas,

And shove it up your ass.”

I forgot the other verses, but they were equally to the point.

That night I was introduced to ear-splitting artillery interdiction fire seemingly just outside our tent, and didn’t sleep a wink while trying to work out how this fitted in with the supposed Christmas truce.

A month or two later in the Reuters office in late evening I got a call from Barry Zorthian, the chief information officer, saying that Bernie and his military escort from the Danang press centre had been killed by the lethal jumping mine.

Surprised and shocked, I walked across the office and picked up Fall’s book Street Without Joy from our small library. Spookily, it was dedicated to “those who died there”. Did Fall have a premonition, I wondered, as I typed out a story?

Pity that so few people in Vietnam did not heed Fall’s message. It might have saved some lives.

But at the time no-one wanted to hear of the lessons the French had from their own defeat. After all, it would never happen to the rest of us… would it?

PHOTO: Bernard Fall (left) and Jim Pringle getting ready to leave Dong Ha for the US Marine base at Christmas 1966.

Jim Pringle served two 18-month assignments in Vietnam, the latter as bureau chief, before re-opening the Reuters bureau in Peking after the release of Anthony Grey, who was two years a hostage in China where he saw Red Guards strangle his pet kitten in front of his face while his hands were pinioned behind his back. In 1968 Reuters lost two men dead in Vietnam, Bruce Pigott of Australia and Briton Ron Laramy. Reuters people who haven’t done so should see their memorial plaque in St Bride’s. ■