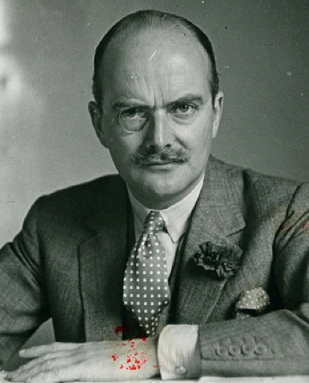 Few men had such a deceptive façade. His monocle and carnation gave a first impression of an indolent bon viveur, but Bernard Rickatson-Hatt, Reuters chief editor 1932-1941, was far from indolent. He was a man of note in high places well outside Reuters.

Anne Sebba, in her article for The Baron [Reuters, the Prince and ‘that woman’], gives an excellent account of Rickatson-Hatt’s close involvement in the abdication crisis of 1936. Yet this was but one dimension in a long, colourful and sometimes curious career.

Rickatson-Hatt joined Reuters in 1925 from the Coldstream Guards, initially as temporary personal assistant to the boss, Sir Roderick Jones. Always impeccably dressed, Rickatson-Hatt usually wore a bowler hat, carried a rolled umbrella and sported a Guards tie. But there was more, for his complexion led people to believe that he was no stranger to the tin of rouge; he was also suspected of wearing a corset. He often arrived carrying under his arm a small pug dog. Odder still in the newsroom, he read Greek and Roman classics in the original.

There were those who suspected that all this was merely a façade. Façades are, of course, not unusual in politics or business. Jones (who was also suspected of wearing a corset) managed to conceal his humble origins for the whole of his Reuters career.

In 1915, during the Great War, Rickatson-Hatt left Oxford High School at the age of 17 to join the Coldstream Guards, eventually being commissioned as a second lieutenant. He saw action in France during which he was badly gassed; but he recovered sufficiently to be deployed on army intelligence work at Constantinople (about which he always kept silent). Remaining in Constantinople, he finished his army career there as provost marshal. Meanwhile, John Buchan - famous writer, deputy chairman of Reuters and friend of Jones - had established a new family home at Elsfield Manor, just outside Oxford. An acquaintanceship with the Rickatson-Hatt family seems to have developed; and on Buchan’s recommendation, upon leaving the army in 1925 Rickatson-Hatt applied to Reuters for a job. Jones clearly spotted his potential, despite Rickatson-Hatt’s lack of journalistic experience. By the late twenties, he had been made chief correspondent in New York.

For him, New York in the twenties (before the great crash of 1929) was a stimulating place. Rickatson-Hatt embraced its confident modernity and enthusiastically adopted American slang and expressions, while still playing up his “ultra-British” dress and appearance. This combination must have worked socially because it was in New York that he met and married his first wife. However, the marriage turned out to be a disaster due to “physical incompatibility”; but this was not known at Reuters. The couple divorced in 1939.

How good a journalist was he? Rickatson-Hatt was said by some to be a “man of glass” - possessing an unquestionably quick news sense and good at ensuring that Reuters was first with the news, but less interested in following stories through. However, for Jones, he was just what was needed to give Reuters a much-needed injection of modernity and fresh air. In 1931 Rickatson-Hatt was recalled to London to fill the new role of editor-in-chief. This title was felt to sound more American and dynamic than the previously used “chief editor”. A reorganisation and modernisation of the London news services was soon under way.

But then Rickatson-Hatt’s friendship with Ernest Simpson - husband of Wallis Simpson, Edward VIII’s mistress - came into the reckoning. As the 1936 abdication crisis unfolded, Rickatson-Hatt was increasingly faced with a conflict between his professional loyalty to Reuters and his private loyalty to the Simpsons, and beyond them to the King.

Rickatson-Hatt was said by some to be a 'man of glass' - possessing an unquestionably quick news sense and good at ensuring that Reuters was first with the news, but less interested in following stories through

The archive evidence confirms that Rickatson-Hatt put Reuters second. Possibly before and certainly after the abdication, he was in effect taking bribes from the Duke and Duchess of Windsor, as Edward and Wallis became after the abdication, to manipulate the Reuters file. Did Jones know what was going on? If not, he certainly should have done.

Well before the outbreak of the Second World War in 1939 cracks were beginning to appear at Reuters. Jones was past his prime, journalistic standards were failing and revenue sources were weakening. The British government realised that at this time of national emergency something had to be done. In February 1941 Jones was given no choice but to resign, and Reuters was reconstructed as a non-profitmaking trust. Rickatson-Hatt left a month later.

This might have been the end of Rickatson-Hatt, but it wasn’t. Immediately, he received an invitation from the governor of the Bank of England to join him as an adviser on press relations. Rickatson-Hatt remained in post until his retirement in 1958 at the age of 60. He then joined the Bank of London and South America in a similar capacity. Was this a case of people in high places looking after a friend? Maybe.

Three further small pieces of information could be relevant. On 10 May 1941, deputy Fuehrer Rudolf Hess flew from Germany to Scotland apparently with the intention of meeting the Duke of Hamilton whom he had been led to believe headed a powerful British peace party. Some historians now think that, as part of the plot to lure him to Scotland, Hess was given false information by someone on good terms with the Foreign Office, the Secret Service and the Ministry of Information – and that the someone was Rickatson-Hatt. Hess had met the ex-king and his wife at a lavish banquet in Berlin on the occasion of their private visit to Germany in 1937. Could Rickatson-Hatt have been using his connections with the Windsors as a successful double-bluff?

When researching his 1959 thriller Goldfinger, Ian Fleming needed information and background on the worlds of gold-smuggling and espionage. And to whom did he turn? To his old boss at Reuters from his time as a junior sub-editor and correspondent - Bernard Rickatson-Hatt.

On his death in 1966 Rickatson-Hatt left a large and extensive book collection. It included a set of pornography said then to be the finest in the world. Alas, I cannot confirm this, for regrettably my research has not extended so far. ■