Reuter Monitor terminal: A brief history of its development

The following account of Reuter Monitor terminal development in the mid-1970s was written by Peter Howse, formerly a hardware specialist and development manager, in June 2014 during research for the technical development chronology which appears elsewhere in this section. 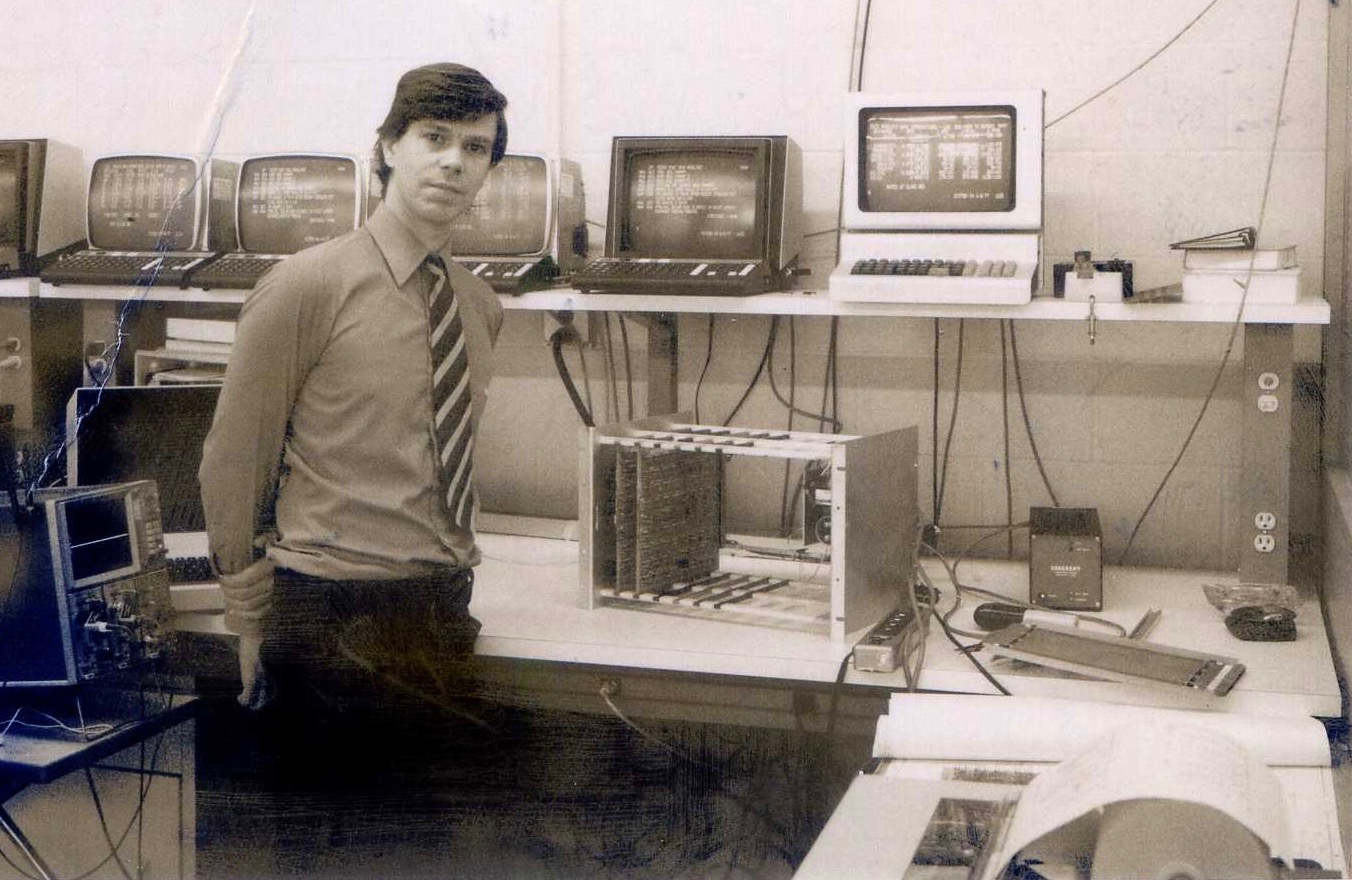 The new box of tricks was thought to be unsuitable for the Reuter Monitor. When it came to the end of its life, it had sold more than 31,000 units and changed the company.

The Digital Equipment Corporation PDP8 Mini Computer would support three screens/keyboards, printer and modem connection. Patrick Mannix was the project manager and the initial 30 client installations were in London. This went fairly well, apart from the weight of the terminal and getting it in and out of taxis. Taxis were the only option as, initially, we didn’t have our own transport. The reliability of the PDP8 was suspect because in some cases, when using all 20 card slots for a fully-equipped three-screen terminal, it used three circuit boards per display, putting a heavy load on the internal power supply. Fewer screens seemed to increase the reliability. 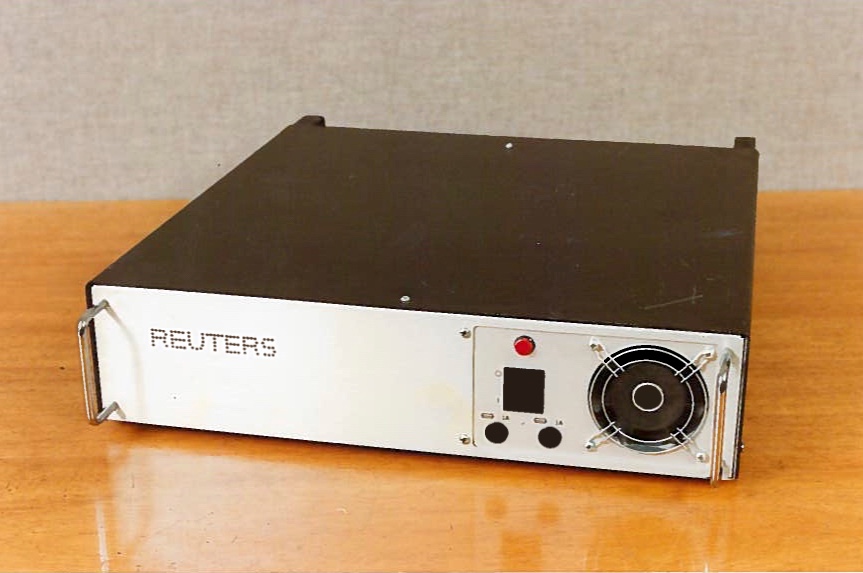 Before the PDP8s could be installed, a custom-designed distribution box had to be fitted and wired onto the unit to connect the screens/keyboards and modem to the internal boards.

This work was done at the Saffron Hill field group offices (courtesy of Ken Pratt who was running UK Field Group at the time).

I was not disappointed when my stint in field group ended and the Monitor field installations were handed over to Len Ryan. Later, in 1975, I was offered a three-year assignment to the IDR-based plant in Farmingdale, New York by David Russell  to work on the microprocessor-based row grabber system operating in North America.

Cyril Smith was in overall charge of IDR and was also responsible for all Monitor installations in North America at that time. The supply of PDP8s came direct from DEC based near Boston.

The biggest problem was that DEC would ship the PDP8s without a full compliment of boards installed, at the same time billing RNA for the equipment even though we were unable to install the terminals until the complete number of boards were delivered.

Cyril Smith was far from happy with this situation and made numerous complaints to DEC, but to no avail. We all discussed this issue one Friday evening in the Crow’s Nest bar and following a few beers I suggested to Cyril and Dave Russell that I should switch from working on the row grabber and build a microprocessor-based Monitor terminal based on an Intel chipset to replace the PDP8 as it would be a lot cheaper, more reliable, and totally under our control.

We also had the advantage of an operational manufacturing environment in the form of a fully-staffed production line facility, test and shipping department.

I would design the hardware using the same Intel chipset as the row grabber terminal and we could get a contracting software person in to write the program. It all seemed so simple on a Friday night after a few beers when one tends to see things in a different light.

In the cold light of day on the following Monday morning, however, Dave Russell and Cyril Smith had run the idea by Glen Renfrew, then North American manager, who agreed that we should proceed with the project forthwith. So that was that, and it all seemed a bit scary to me, to say the least.

The first thing I needed was a good programmer with the knowledge of macro assembler, hence our top IDR software guy then, Dale Fisher, started to interview programmers who fitted the bill. We finally chose a chap from Connecticut, Mike Hatzemannual.

Mike and I sat down for a few days and put an outline design together for the main processor board. I then designed a separate board to support five displays, two more than the PDP8 but the optimum number the processor could support. All of the required parts were available at IDR’s in-house stores, which made it possible to proceed without delay.

The main processor board consisted of an Intel 8080 microprocessor 6Kb of non- volatile program memory and 1Kb of volatile RAM, five parallel ports for the keyboards and two serial ports, one for the modem one for the printer. The device was interrupt-driven using two Intel interrupt controller chips used for alerting keyboard input and the allowable video writing areas, as displays could not be written to during the page refresh period.

The second board consisted of a single display sync generator (meaning that all five displays would be locked to each other unlike the PDP8 which caused adjacent displays to interact with one another), five 1KB display memories, sync generator logic, and keyboard interface to enable the keyboard to be located up to 200 metres from the terminal.

The mechanical design of the enclosure was such that the front panel consisted of a printed circuit board including all of the required connectors which plugged directly onto the double-ended processor board, thus eliminating the need for any intensive internal wiring.

The original two boards were in wire wrap form until de-bugging was completed.

After assembling the hardware in a wire wrap development nest, Mike attached the Intel In Circuit Emulator to the processor board and started to debug the software in the development lab. We also installed a PDP8 terminal side-by-side with the MAS300 prototype to ensure that the functions were identical during debugging.

Much to my surprise and relief, three months later, in April 1977, we started to retrieve Monitor pages from the New York Monitor host. I was then convinced we could make this work, but to my horror when Cyril Smith saw this prototype working in the lab he cancelled all further orders for PDP8s from DEC.

We then began to manufacture 50 printed circuit board units and house them with a power supply in a small aluminium enclosure. The unit was very light and could be carried under one arm - no more hernias. We ended up with a Monitor terminal that would support five displays instead of three, consist of two circuit boards versus 20 and weigh 75 per cent less. The cost to manufacture was one-third that of the PDP8 and also provided for two further key stations per unit.

The MAS300s were then installed throughout North America as orders rolled in as a direct replacement for the PDP8.

During this time Patrick Mannix requested that we demonstrate this unit to the people in London which I did, spending a week in field group, sales and marketing. The terminal was designed to operate anywhere globally: the video refresh rate was designed to be switchable between 50/60 Hz and the power supply 110/240V. Hence there were two variations of this terminal, the first MAS300 for the Monitor American Standard (60Hz refresh 110v power) and the latter MES300 for Monitor European Standard (50Hz refresh 240v power). The number 300 related to the product range number IDR were currently using.

To my surprise, when I got back to New York somebody (I never discovered who), had smuggled to me a copy of a letter from Peter Benjamin to general manager Michael Nelson saying that he didn’t feel that this unit would be suitable for a replacement PDP8 Monitor terminal. However Patrick Mannix proceeded to place orders for these units to be installed in the UK and globally. When the Monitor’s days finally came to an end, IDR had manufactured a large number of these units. I verified this by asking to see the work sheets in the test area at IDR and to bid farewell to my old buddies there. It was in excess of 31,000 units. Happy days.

PHOTOS: (1) Peter Howse in the IDR laboratory at Farmingdale, New York in April 1977, and (2) the finished article, the MA/ES300 Reuter Monitor terminal.