News is no longer merely a journalistic commodity. Internationally it is becoming, in some cases has become, an instrument of warfare, bloodless, but warfare none the less. 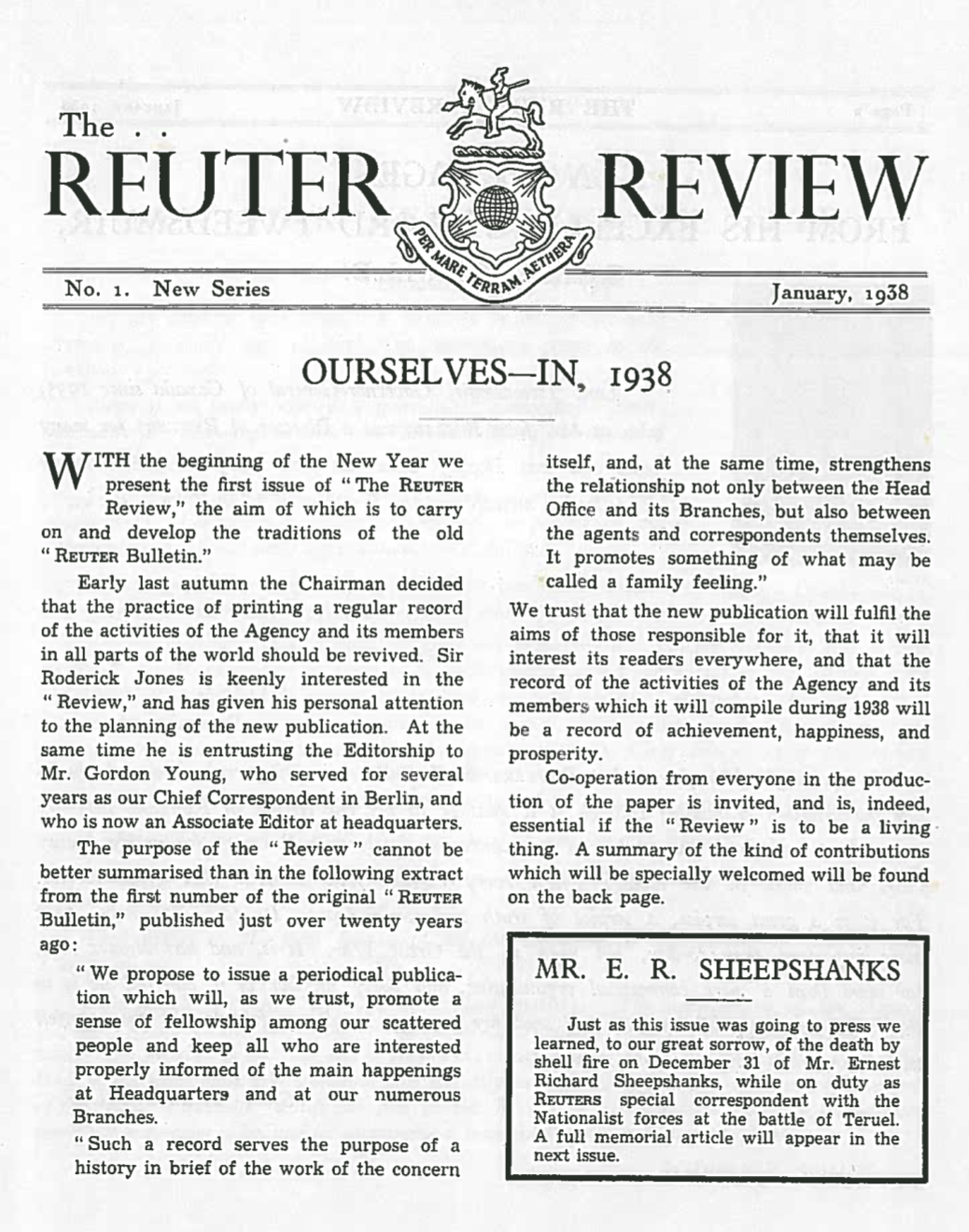 Stirring stuff from the chairman of Reuters aimed at fortifying the staff in an era of uncertainty as European powers manoeuvred towards war.

It was 80 years ago and for two generations Reuters had been the only international news organisation, as Sir Roderick Jones wrote on 1 January 1938 in a new staff magazine called The Reuter Review, successor to the defunct Reuter Bulletin.

“For nearly a century we have been the paramount and dominant international news organisation. We still are,” Jones declared.

“But our position is being challenged by the Government services and officially or nationally supported services of other countries.

“We are meeting that challenge. It does not intimidate us. On the contrary, it is putting everybody at Headquarters in London on their mettle, and I am confident that it will have the same effect upon our correspondents and our staff generally throughout the world when they realise that an international situation has arisen which makes a call upon all of them, juniors no less than seniors; a call to co-operate with the Chief Executives of the Agency in London and with the General Managers abroad to the utmost of their power, not only in maintaining but in promoting still further the prestige of the great organisation to which they belong.

“I have said repeatedly that Reuters are the staff, and the staff Reuters.

“That is no figure of speech. It is the reality. We have no tangible machinery, no equipment; just men and brains.

“That makes us the most human of all the cosmopolitan aggregations of activity that I know of.”

Jones had been head of Reuters since the second Baron de Reuter, son of founder Paul Julius Reuter, shot himself following the death of his wife in 1915. During the Great War Jones simultaneously headed the Department of Propaganda at the British government’s Ministry of Information, service for which he was knighted.

Imperious and autocratic, in 1941 he would be forced to retire over a compromising deal with the British government that threatened Reuters’ independence and which he concealed from the board.

The incident gave rise to the Trust Principles as a shield to safeguard Reuters’ independence and freedom from bias. Adopted by Thomson Reuters during the takeover of Reuters by the Thomson organisation in 2008, they remain in force today.

Eighty years ago, Reuters’ reputation for editorial integrity and impartiality was already well established, although it was not always recognised universally.

A section in the Review titled As Others See Us reported a view of Reuters by Joseph Goebbels, Adolf Hitler’s Nazi propaganda minister. In Berlin Sports Palace on 5 November 1937, he began a speech by saying:

“The British Reuter office this morning carried a report from Berlin giving the exact contents of the speech which I am going to make to-night.

“While greatly respecting the quickness of British journalists, I must say this is going too far. As a result of pressing business it was only at noon to-day that I was able to think of what I was going to say to-night. Either has the Berlin correspondent invented the story or he read my speech in his coffee-pot.”

The report to which Goebbels took exception predicted “The German claim for colonies, the Spanish question, and the position of the German minority in Czecho-Slovakia are likely to figure in the speech.” It added: “No startling pronouncements, however, are expected, though some of his statements may be very pointed.”

The Reuter Review noted that “Actually Dr. Goebbels mentioned colonies twice, and Spain once, in his speech, which, moreover, as predicted, did not contain any ‘startling pronouncements’.”

Organisers of a Nazi auction in Berlin included a broad joke at Reuters’ expense among the attractions of the sale.

One of the objects offered for auction was a large replica of a duck, with the word ‘Reuter’ displayed around its neck. Nazis explained that this was intended to represent a newspaper ‘Canard’.

“The Reuter duck proved one of the most popular objects auctioned, despite the rival attractions of an aeroplane trip over Berlin, and a ticket for tea with a popular actress,” the Review reported. No doubt the ‘rarity value’ set on this mock Reuter duck was the result of the difficulty of discovering a real ‘Canard’ in the Reuter reports from our trustworthy Berlin bureau!”

In Asia, Reuters came under fire from Japan, then at war with China, for alleged pro-China bias.

The Review reported “many tributes to Reuter dispatches on the Far Eastern situation” and noted: “How valuable to Reuters and to Reuter subscribers is the Company’s reputation for reporting both sides of every question, for giving facts instead of propaganda.”

Then as now, Reuters staff sometimes became the news.

Hubert Harrison, long-serving correspondent in the Balkans, was ordered by the Yugoslav authorities to leave within three days.

No official reason was given for his expulsion, the Review reported, but Harrison was several times interrogated about a paragraph concerning the banning by the Yugoslav censor of a comic strip about Mickey Mouse which had appeared in a London newspaper.

Harrison denied any responsibility for the offending paragraph but was nevertheless held responsible.

A decorated Tank Corps machine-gunner during the Great War, Harrison had been a special correspondent in the Abyssinian War in 1936 when he survived Italian bombing of a British Red Cross unit. The Reuter lorry, and all his gear including his money, was destroyed in the attack.

Well informed and popular, on his departure by train from Belgrade following the expulsion order he was cheered “amid scenes suggesting the departure of a national hero into exile rather than the expulsion of an undesirable alien”, as The New York Times reported.

A question was raised in the British parliament about the expulsion “on the ground that he transmitted to foreign countries a statement that a Mickey Mouse comic strip in a Belgrade newspaper had been banned because it bore on national politics”.

Was it right for a British subject to be expelled from a country for such a ridiculous reason, a parliamentarian enquired. Would the Secretary of State for Foreign Affairs “do something to instil a little sense of humour into these people?”

Harrison had survived the hostilities in Abyssinia, now Ethiopia, but a colleague embedded with military forces in another war did not. As the new staff magazine went to press, news was received of the death by shell fire of Ernest Sheepshanks, special correspondent with Nationalist forces in the Spanish Civil War.

Two others in the same car at the battle of Teruel died with him. The sole survivor was the fourth person in the car: Kim Philby, uncovered many years later as a Soviet spy at the heart of British intelligence, who escaped with minor injuries.

The inaugural Reuter Review included a message “to my old friends at Reuters who are scattered up and down the world” from the Governor-General of Canada Lord Tweedsmuir. As John Buchan, author of The Thirty-Nine Steps and other novels, he had been a director and executive deputy chairman of Reuters.

“I was connected closely with Reuters for nearly twenty years and share in the loyalty which every member feels towards that great service. For it is a great service, a service of truth and world peace,” he wrote. “Its task has never been more important than to-day, not even in the Great War. It is, and has always been, far more than a mere commercial organisation, and every member of it can feel he is in the fullest sense a public servant. I send my greetings to all my friends and my heartfelt wishes for their happiness and success.”

Barry May is editor of The Baron and a former editor of Reuters World, successor to The Reuter Review. He is grateful to David Cutler, who runs the Reuters Archive following the death last year of John Entwisle, for access to the archives. ■