John Morrison on the guilty pleasure of making up quotes

Former Moscow correspondent John Morrison has a new play set in Russia opening this month at a fringe theatre in London. Here he writes about how he made the transition from fact to fiction. 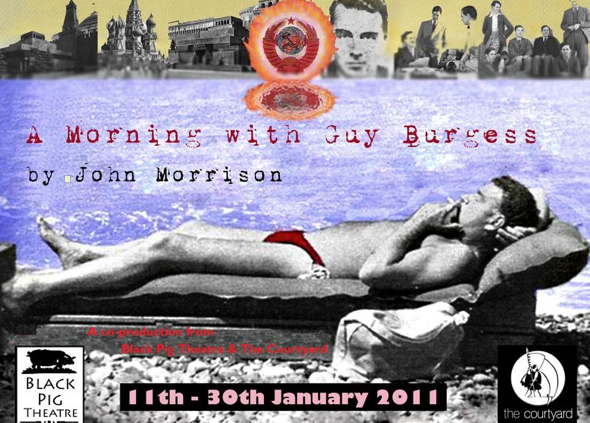 “Never make up a quote,” one of my bosses at Reuters told me when I joined as a wet-behind-the-ears trainee in 1971, equipped with a working knowledge of Pushkin but not much else. A few months later, freshly married, I was working in Moscow with Andrew Waller, Donald Armour and the late Chris Catlin, determined not to blot my copybook. Making up quotes wasn’t the sort of thing we did, especially in Moscow, with the KGB reading every word we punched out laboriously on an ancient telex keyboard.

Nearly 40 years later, I still feel a twinge of guilty pleasure when I put words into the mouths of real people as a playwright. Sticking to the historical facts won’t get you far on stage; at the best it will lead to a turgid drama-documentary. And yet, as I found in writing a play about Soviet spy Guy Burgess, the best stories are often true, like the one that filtered out of the KGB archives at the end of the cold war about Burgess and his close friend Goronwy Rees. Panicking about the risk of being betrayed to MI5, Burgess offered to murder Rees, but his Moscow controllers vetoed the idea.

Burgess, the most theatrical of the Cambridge spies, died in Moscow in 1963 aged 52 after a lifetime of drinking and smoking. My play imagines him shortly before his final admission to the Botkin hospital, looking back on his life. I had the idea of writing a play about Burgess back in the early 1990s, when as a World Desk fireman I often flew in to the busy bureau in Moscow, the city which had been my home for more than five years in the 1970s and 1980s. I took the opportunity to interview retired KGB colonel Yuri Modin, who as a young spy in the 1940s had worked with Burgess in London. He described Burgess, known for his alcoholic benders, as surprisingly punctual and reliable - a very professional spy indeed.

My early efforts at playwriting foundered on a lack of understanding of how to structure a play. After I left Reuters in 2000 I had time to devote to learning a new craft, which I developed by joining Player-Playwrights, a London-based group of actors and writers who meet weekly to read and discuss new writing. While I quickly got over my reluctance to make up quotes, I found my journalistic instinct to explain everything as clearly and as early as possible to the reader was a huge handicap. Writing drama often means covering up what’s happening and keeping the audience guessing.

A Morning With Guy Burgess tells a well-known story in a new way, by concentrating on his relationship with Russia and the Russians. Did they betray him by making him defect to a country which never trusted him and which he ended up hating? Or did he betray ordinary Russians by working for Stalin at a time when he was slaughtering millions of his fellow countrymen?

I would be delighted to hear from any former colleagues who want to see the play. It’s on at the Courtyard Theatre, 40 Pitfield Street, Hoxton N1 6EU from 11 to 30 January, with performances from Tuesday to Sunday at 7:30 pm. Tickets are £15 and £11 concessions from www.thecourtyard.org.uk or by telephone at 0844 477 1000. The theatre has free seating and the bar opens at 7:00 pm. Pitfield Street is a five minute walk from Old Street on the Northern Line (take street exit 2 from the tube station). The theatre entrance is on Bowling Green Walk. ■