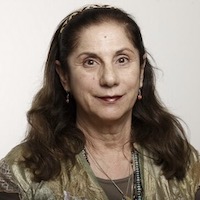 Doris Frankel (photo), who died this month in Chicago at age 75, left a strong impression on everyone she met, from colleagues to sources.

Her career was a classic one for Reuters, devoted to breaking news and market intelligence that subscribers could get nowhere else. And her style was classic Reuters - smart, relentless, fearless, engaging ... and fun.

Doris was a market reporter - the best we two ever saw, Janie Gabbett and Peter Bohan write. For years she laboured in what her colleagues often considered the secret backwaters (if not swamps) of the financial markets - commodities. But her passion for finding out what made the markets tick each day was infectious. It inspired not just her colleagues but her sources. And no matter what beat she covered - sugar, cotton, copper, grains, shipping - her passion paid off.

Just two examples: In 1994, Chile's copper mining giant CODELCO was hit with losses of $175 million in a trading scandal tied to secret trades by a rogue trader. Reuters broke the story, thanks to a rock solid copper industry source Doris had developed. In 2000, the world corn industry was jolted when Starlink corn, a GMO variety not approved for food use, was detected in a US cargo ship docked in Yokohama. Reuters broke the story, based again on an impeccable grain industry source Doris had developed.

Both stories rocked their industries and regulators for months. Both were based on the cash commodities industry, whose whole world is secrecy. Robert Kuok, the sugar king of Southeast Asia, once explained to an interviewer how he became so successful: "I had Reuters." Doris was part and parcel of that storied tradition.

More than two decades of such coverage in New York and Chicago were just a prelude to her final years before retirement in 2013 when, given the opaque and daunting stock options markets to cover, Doris again took a shrouded world of markets and produced a stream of stories - sometimes, four or five a day - that flagged gyrations in equity and index options. The result was hundreds of follow-on stories from company reporters using these tips from Doris to break news on products, mergers, lawsuits, SEC actions, CEO changes, etc.

All put and kept Reuters News in the headlines - and on traders' desks.

But her scoops and news tips were not the thing her colleagues remember best and value most about Doris. Her personality was a joy. The daughter of Holocaust survivors and devoted to her faith, friends and family, Doris wore her heart on her sleeve - or rather on much-bangled and braceleted arms and wrists. To listen to her kibbitz, shmooze or chat up sources was the best show in town.

Reuters, and her many friends, were lucky to have her. ■