Support for jailed reporters' families, increased efforts to free them 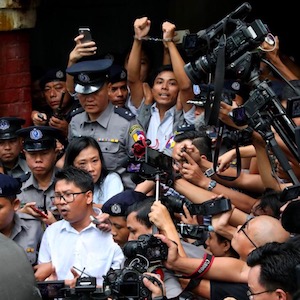 Thomson Reuters is supporting the families of the two Reuters reporters jailed in Myanmar and will "double down" on global efforts to secure their release, chief executive James Smith said after they were sentenced to seven years in prison.

“We are disappointed and saddened by this harsh outcome, but not wholly surprised by it,” Smith tweeted. “We will continue to support Wa Lone and Kyaw Soe Oo’s families during this difficult time, and will now double down on our international advocacy and outreach.”

Wa Lone and Kyaw Soe Oo - pictured as they left the court on Monday - both have young daughters and have not seen their families outside of prison visits and court hearings for nearly nine months.

Kyaw Soe Oo’s wife, Chit Su Win, burst into tears after the verdict, and family members had to support her as she left the court.

Earlier, editor-in-chief Stephen Adler, said: “Today is a sad day for Myanmar, Reuters journalists Wa Lone and Kyaw Soe Oo, and the press everywhere. These two admirable reporters have already spent nearly nine months in prison on false charges designed to silence their reporting and intimidate the press. Without any evidence of wrongdoing and in the face of compelling evidence of a police set-up, today’s ruling condemns them to the continued loss of their freedom and condones the misconduct of security forces. This is a major step backward in Myanmar’s transition to democracy, cannot be squared with the rule of law or freedom of speech, and must be corrected by the Myanmar government as a matter of urgency. We will not wait while Wa Lone and Kyaw Soe Oo suffer this injustice and will evaluate how to proceed in the coming days, including whether to seek relief in an international forum.”

Later, after US Congressman Adam Schiff described the sentence as “outrageous” and called for their immediate release, Glocer wrote: “Thank you Representative Schiff for keeping the focus on these brave Reuters journalists and for your ongoing efforts to ensure that Trump’s war on journalism and truth does not succeed in this country.”

US ambassador to Myanmar Scot Marciel: “I’m sad for Wa Lone and Kyaw Soe Oo and their families, but also for Myanmar. It’s deeply troubling for everybody who has struggled so hard here for media freedom.

“I think one has to ask will this process increase or decrease the confidence the people of Myanmar have in their justice system.”

British ambassador Dan Chugg: ”Speaking on behalf of the British government, but also on behalf of European Union member states, we are extremely disappointed by this verdict.

“Freedom of expression and rule of law are fundamental in a democracy, and this case has passed a long shadow over both today.

“Today’s court decision… undermines the freedom of the media, the public’s right to information and the development of the rule of law in Myanmar.

“Their sentencing and imprisonment under the Official Secrets Act of 1923 for covering allegations of serious human rights violations in Rakhine State also serve to intimidate other journalists who will fear harassment and undue arrest or prosecution for merely doing their jobs.

“Media freedom and critical journalism are essential pillars of democracy. A free press has a key function in promoting transparency and holding democratic governments to account.

“The prison sentences of Wa Lone and Kyaw Soe Oo should be reviewed and the two journalists be released immediately and unconditionally.”

Tirana Hassan, Amnesty International’s director of crisis response: “These convictions must be quashed, and both men immediately and unconditionally released.

“This politically motivated decision has significant ramifications for press freedom in Myanmar. It sends a stark warning to other journalists of the severe consequences that await should they look too closely at military abuses. This amounts to censorship through fear.”