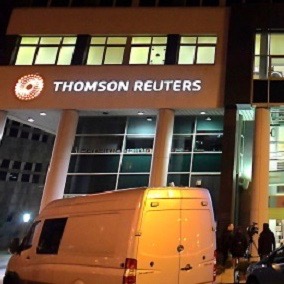 Shots were fired in a Thomson Reuters building in Gdynia, Poland (photo), on Tuesday evening, police said. No one was hurt.

An armed man entered the second floor of the building on Slaska Street carrying a rifle and a handgun and fired two shots, according to witnesses. Terrified employees lay down on the floor and called the emergency number.

Police detained a 30-year-old Belarussian employee after he was overpowered and disarmed by another employee, local media reports said.

More than 1,400 people from 30 countries work at Thomson Reuters’ operations and editorial production offices in Poland. ■