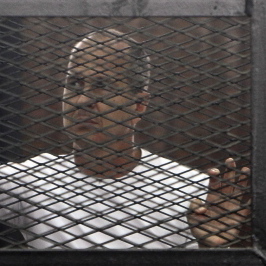 Greste is an Australian who previously worked for Reuters in Afghanistan, Bosnia and Serbia.

He and Canadian-Egyptian Mohamed Fahmy and Egyptian national Baher Mohamed were sentenced in June 2014 to seven to 10 years on charges including spreading lies to help a "terrorist organisation" - a reference to the outlawed Muslim Brotherhood. The journalists say they were merely reporting the news. All three were working for Al Jazeera television.

Defence lawyers said procedural flaws in last year's trial were cited as the reason for the retrial.

Lawyers and relatives had hoped the retrial decision would include an immediate release on bail for the men, who were detained in Cairo in December 2013.

Defence attorney Mostafa Nagy, who represents Greste and Mohamed, said: "They will not be released until they appear before the new chamber, which will decide whether to release them or not.”

He and another defence attorney said the judge had not set a date for the new trial although they believed proceedings could begin within a month. The journalists' lawyers can apply for bail during the first retrial hearing.

Greste's parents left quickly after Thursday’s hearing at the High Court in Cairo. "We need some time to process. It's not as positive as we had hoped," his mother, Lois, said of the court decision. ■